Book Review: Us by Sarina Bowen and Elle Kennedy 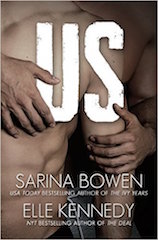 It’s great I didn’t have to wait too long for Sarina Bowen and Elle Kennedy to put out the sequel to last year’s excellent Him (which I reviewed as part of my big book review-polloza late last year). Us picks up a few months after Him left off as Wes and Jamie are getting used to living together during Wes’ rookie season in Toronto.

Inside their apartment, it’s easy for the guys to live in their own little world, but the reality is that they’ve traded one closet for another since Wes isn’t out in public. Life gets more complicated when a loudmouth teammate moves in upstairs and Jamie’s job is working out as good as he’d expected it too. All of this puts a lot of tension on the guys’ still growing relationship.

I can’t say enough wonderful things about this book. It is the perfect follow up to Him as we get to find out the lengths that Wes and Jamie go to so that their love can work. It’s far from easy going as the stress of being their situation takes serious tolls on them. Bowen and Kennedy upped the ante significantly in Us, throwing so many things at the guys.

I love the loudmouth, Blake. He’s a character that brings mayhem to every scene he’s in. It’s a hoot watching the guys deal with him throughout the book.

The authors take a solid stab at equal rights too. One of my favorite passages in the book is between one of Wes and one of his good friends who knows all about him:

Kristine: “Why are there still so many bigoted jerks in this world? And why aren’t we shipping them all to Antartica?”
Wes: “Because we’re nicer than they are.”
Kristine: “Maybe we shouldn’t be. Maybe we should judge and persecute them right back so they know what it feels like.”

Kristine’s soundbite is all the more excellent in the Presidential election season we’re currently enduring.

The book also contains one of the most romantic shower scenes I’ve ever read. It made me think of the scene in Out of Africa when Robert Redford washes Meryl Streep’s hair. It’s a beautiful moment in the midst of a little of chaos for Jamie and Wes.

I’m not going to say any more because I’m not going to risk giving spoilers. Suffice to say I loved this book. It’s a great story about two guys trying (and sometimes failing) to make the best of a difficult and weird situation. I hope these guys, and Blake, come back in a future installment.

If you want to learn more about Us, check out my interview with Sarina Bowen on Jeff & Will’s Big Gay Fiction Podcast.