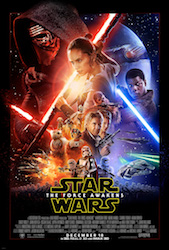 Hooray! Will and I got to go to the theatre for a Star Wars movie that was good. For those still avoiding spoilers, there are no spoilers ahead in this short post.

I thoroughly enjoyed Star Wars VII: The Force Awakens. I laughed. I cried. I was tense. Most of all I was excited. And I was never bored like I was so much in episodes one, two and three.

One quibble on that story though–there were several points that felt very similar to Episode IV: A New Hope with new characters and settings plugged into the situations. J.J. Abrams recycled Star Trek for his reboots and he seems to have done a bit of that here too. It didn’t dampen my enjoyment though.

Lastly, I seriously missed the 20th Century Fox fanfare at the start of the film. There’s a way a Star Wars film begins in my head: Fox logo and fanfare, Lucasfilm logo, “A long time ago in a galaxy far, far away…” and then the epic Star Wars theme. I know this is a very silly point, but it made me sad this bit of nostalgia was gone in the Disney era (at least it didn’t have the Disney castle because that would’ve been weird).

For the first time in a long while, I’m looking forward to the next Star Wars film. Bring on Episode VIII.