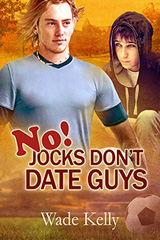 I’m a big fan of Wade Kelly’s (and I would be even if she wasn’t a friend). She writes characters with such rich detail and combines them with in-depth heartfelt stories that it’s impossible for me not to fall in love with her books. Her latest No! Jocks Don’t Date Guys, the second book in her JOCKS series, introduces two new characters to the JOCKS universe while also allowing readers to revisit old friends.

Soccer player Chris falls fast for Alonzo, but you wouldn’t expect these two to get together. Chris is a popular, easy going, fun jock while Alonzo appears to be something between goth and emo. They’ve both got baggage too. Chris is out to just one close friend and he’s terrified to tell his parents because his dad is hung up on him keeping up the family tradition of marrying a cheerleader. Meanwhile, Alonzo is attempting to put his life back together by moving across the country and enrolling in school.

Chris is absolutely adorable as he tries to coax Alonzo out of his shell. The interplay between Chris and Alonzo is wonderful and sold me on this book early on (you’ll never look at Gummy Bears the same way again). They are a joy to read, even when the going gets tough…and particularly for Alonzo the story takes some dramatic turns as Chris finds out about his past.

Ellis and Cole from My Roommates a Jock? Well Crap! are along for the ride as well. Ellis is the soccer coach at the University and he gets some really nice moments with Chris as Chris figures out how to come out now that he’s got a boyfriend. There are some great supporting characters here too. Doug, Chris’ best friend, has a bout of jealousy that revealed a lot of complicated things going on for him (and I’m not going to say more than that as I don’t want to get into spoilers). There’s also Lance, a barista, who befriends the new couple and offers them support that was great to witness.

This book was an ideal mix of fun romance and emotional rollercoaster, which is exactly what I expect from a Wade Kelly book. It’s not as emotionally draining as Misplaced Affection (one of my favorite books of 2015), but it carries enough emotional punch to give the reader something to think about after the book is done.

[callout]
You can learn more about No! Jocks Don’t Date Guys over at JeffAdamsWrites.com where Wade Kelly talks about her muses in this book and others. I also interviewed Wade for Episode 3 of Jeff & Will’s Big Gay Fiction Podcast where we talk about this book.
[/callout]