The Phantom of the Opera – New Touring Production 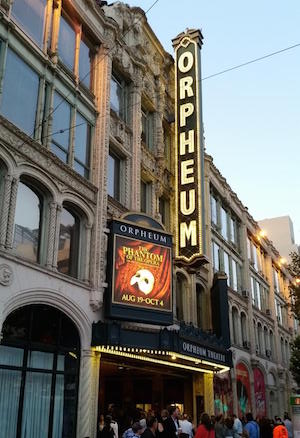 Over the weekend, we went to San Francisco to catch the touring production of The Phantom of the Opera, which is currently billed as “Cameron Mackintosh’s Spectacular New Production.” For nearly 30 years, since it first opened in London, Phantom has had the same look–lush curtains the rise up during the overture, a grand staircase for “Masquerade” and a chandelier that crashes the stage.

Much has changed in this touring production, especially in the scenic elements, but what hasn’t changed is the music everyone knows and loves. It’s said that the orchestrations were updated to eliminate some of the 80s pop overtones, but I couldn’t tell much of a difference.

The new scenic is a somewhat mixed bag. The lack of a grand staircase for “Masquerade” makes that scene much less grand. It merely takes place in a ballroom, and it doesn’t give the Phantom as much menace as he enters to disrupt the party. Another strange change is that the chandelier doesn’t crash the stage (nor does it rise from the stage at the start of the show), it merely drops down to just above the audience. However, the way the Phantom gets Christine to the lair is pretty clever. Much of the stage is dominated by a half cylinder that rotates and allows various elements to be revealed, including the backstage area and the manager’s office. It was a great use of space.

One of the things I didn’t like in the new staging, and perhaps this is because I’ve seen the original a dozen or so times, is that “Music of the Night” lacked sensuality. This played itself out a little more over the course of the night as the Phantom comes off as more monstrous than before, just as Raoul and Christine don’t seem to have the storybook romance. It’s a subtle shift in the love triangle.

“Masquerade” with no staircase…

There weren’t really any standouts in the cast. The were uniformly good, which is what you’d expect. However, Chris Mann (a finalist in season two of The Voice and a classical trained opera singer), as The Phantom, was my least favorite Phantom ever. I don’t know if it’s part of the new production, or simply Mann’s style, but I did not care for his “Music of the Night” at all. Perhaps it was part of the removing the sensuality that changed how the song is sung, but it was a clunker of the evening for me.

Interestingly, director Laurence Connor also directed the  reimagined revival of Les Miserables, which is currently playing Broadway. I found the new Les Miz much more enthralling and rich than the new Phantom. Don’t get me wrong, the new Phantom is good, but the new Les Miz was truly transformative and seeing it was like seeing the show again for the very first time. This Phantom didn’t quite reach that level.