The Porcupine of Truth by Bill Konigsberg 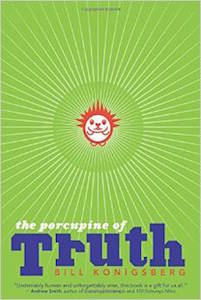 I’ve been a fan of Bill Konigsberg since Out of the Pocket came out in hardback in 2009 (hardback review | paperback review). Yes, I loved it enough to not only buy the paperback, but to re-review it some five years later. In 2013, Bill had me ga-ga all over again with Openly Straight, which perfectly tackled society’s need to label everything.

I’m glad the time span between novels shortened this time out. It’s only been a couple years since Openly Straight (as opposed to four years between the first two). I’ve had The Porcupine of Truth on pre-order since mid-February and was psyched when it dropped into my Kindle on May 26. I devoured it in nine days, which is pretty fast since I’m also writing a lot these days.

Porcupine is nothing short of outstanding. This is unlike Bill’s other two books and it tackles some life’s most difficult aspects, including the impact of secrets, religion and how parents impact their children. He wraps all this up in an entertaining package that had me laughing at times, angry at others, and crying more than once.

In Porcupine, 17-year-old Carson travels to Billings, Montana, with his mom so they can take care of his dying father. This is after the family’s been separated for more than a decade. Carson’s dropped off at the zoo so his mom can check in on his dad alone. At the zoo, Carson meets Aisha, who he soon finds out is living at the zoo having been thrown out of her house because she’s a lesbian. There’s a rocky start to their friendship as they sort each other out, but soon they end up on a mission.

The story on Carson’s grandfather is that he abandoned his family decades before, and it’s something Carson’s father has never gotten over. As he’s sorting through things in the basement, however, Carson comes across boxes of his grandmother’s things, and there are items in there that reveal there’s far more to the story. Carson and Aisha take off on a road trip from Billings to Thermopiles, Wyoming to Salt Lake City and finally to San Francisco to uncover what really happened to grandpa.

After keeping himself fairly sheltered in New York (which is so easy to do), Carson really comes to life on the road trip. I love how he uncovered long buried family secrets, ones that should’ve been put to rest long ago. So often secrets designed to protect someone end up causing destruction, and that’s definitely the case here.

The way Bill handles religion in this book is also extraordinary, and so important in today’s culture where everyone seems to think they know what God intends for people. Three passages on religion I must share, which I do without offering the characters that said them because that would be spoilery:

This comes in response to someone finding Aisha was thrown out of her home: “But true followers of Jesus Christ would never turn their back on a child who was suffering. That’s not conscionable.”

In reference to how people look for absolutes in religion: “Rigidity is dangerous.”

In response to the mass marketing of religion in our society: “I mean it’s prepackaged. Lowest common denominator. People just have to follow the preset motions and rituals and rules. They don’t have to think about how the words reconcile with their own hearts. Their own experience.”

Speaking of spoilers, I’m not going to talk about any more of the plot. Bill weaves his plot perfectly, doling out bits and pieces to Carson, and to the reader, in a perfect way that keeps the road trip going… and the reader completely engaged. I was thrilled I didn’t piece anything together too quickly so that I could take in the story’s crescendo at the same time Carson did. (Looking back I should’ve caught on to some clues, but I’m glad I didn’t.)

I’ve been lucky to read several awesome books so far this year, and this is very high on the list of awesomeness. Bill took his story telling to a new level with Porcupine, just as he did with Openly Straight. He continues to be one of my major author inspirations for exactly that reason–he spins great stories and continually finds morphs his style and techniques.

Now the wait begins for his next book…