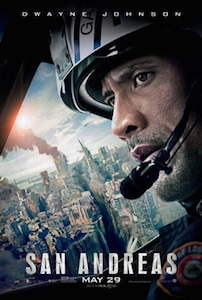 While it’s not an Irwin Allen epic, San Andreas is a good popcorn disaster movie. Having it anchored by the cool-under-pressure Dwayne Johnson is all the better.

The set ups for the disaster are exactly what they should be. We get to meet Ray (Johnson) in action as a LAFD helicopter rescue pilot in action on a non-earthquake dramatic rescue. We also get to meet his family–ex wife and college-age daughter, see his ex’s new boyfriend and find out about the child they lost in an accident. Meanwhile, we also meet CalTech seismology expert Lawrence, played by Paul Giamatti, who proves his tech can predict earthquakes and, oh, by the way, they’re going to happen right now!

The shaking starts in L.A. and Ray has to go save his ex (Carla Gugino) from the roof of a crumbling building. Meanwhile, the quake is headed for his daughter, Blake, (Alexandra Daddario) is S.F. Once he finds out she’s there, and in danger, the action splits in three (1) Ray and Emma getting to and getting around in S.F., (2) Blake and her intrepid friends, Brits Ben (Hugo Johnstone-Burt) and his younger brother Ollie (Art Parkinson), (3) Lawrence trying to get the word out about what’s happening plus providing some perspective on what’s happening in L.A. and what may happen in the Eastern part of the country.

While the LA stuff is not action packed, you know that wherever Ray is there’ll be action, and his daughter gets into a fair bit as well. The action sequences are pretty spectacular, and quite realistic. I was glad I wasn’t seeing the film in 3D because that may have been too much. Where I thought there could’ve been more was some additional on the ground action in LA. We’re introduced to Ray’s colleagues, but once the quake hits and Ray just happens to be on his own in the chopper, we don’t see them again (which is too bad since one of them was Arrow‘s Colton Haynes).

If you think about Irwin Allen’s Earthquake or The Towering Inferno, we get to be invested in several stories/groups for multiple perspectives on the disaster. Here we only have three, which isn’t bad… it just could have been more and would’ve amped up the emotional stakes. In fact, (and skip to the end of this paragraph if you don’t want a bit of potential spoiler), there was a death I was expecting that didn’t come. I think the limited number of people in peril reduced the odds of said people getting killed off by the ongoing shaking. 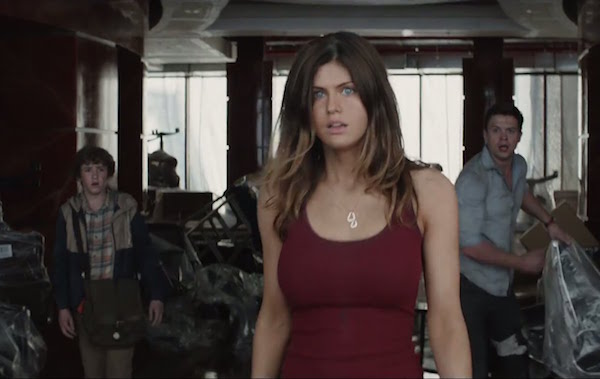 Art Parkinson, Alexandra Daddario and Hugo Johnstone-Burt catch a look at what’s coming at them next.

Overall, though, I had a good time with the movie. Dwayne Johnson is enjoyable in these roles and the interplay between him and  Carla Gugino was great, including some really good humor. Alexandra Daddario also had great chemistry with Hugo Johnstone-Burt and Art Parkinson, so watching all hell breaking loose around them was fun.

All-in-all an enjoyable afternoon with a solid disaster unfolding on screen.