I spent four nights in NYC in a trip that featured attending Rainbow Book Fair, a couple days in my day job’s office and four shows. I probably should’ve seen more people, but it was impossible to resist the draw of seeing some musicals. So I spent three evenings and one afternoon watching all sorts of wonderful entertainment. 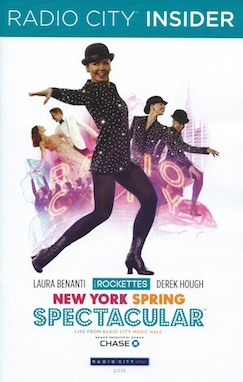 I admit I was skeptical about how spectacular the Spectacular would be since Radio City failed to get this show on its feet last year. However, the draw of  the always fabulous Laura Benanti and getting to see my favorite Dancing with the Stars pro Derek Hough live on stage, overcame that hesitancy.

The show lives up to its name. While the overall plot is thin, a tech entrepreneur wants to virtualize a tour of the city and an angel on a mission from God tries to safe a tour operators job and continue live tours, the show’s component parts make it well worth the ticket price.

What follows is a magical tour through NYC. The centerpiece was a huge “Signing in the Rain” number with Rockettes, Derek and the amazing Jared Grimes, who I first saw in After Midnight. A ton of water gets dumped on the stage and they tap their way through it all. The Rockettes recreating NYC sports, especially Rangers hockey, was very cool. The New York Public Library lions were great as they were sassily voiced by Tina Fey and Amy Polhner. The most gorgeous dance was between Derek and Laura in a romantic moment on top of the Empire State Building, which also included aerial dancers.

I was a fanboy after the show and waited outside Radio City with a rather large crowd to see Derek. I snapped some pics and got his autograph. It was a great night. 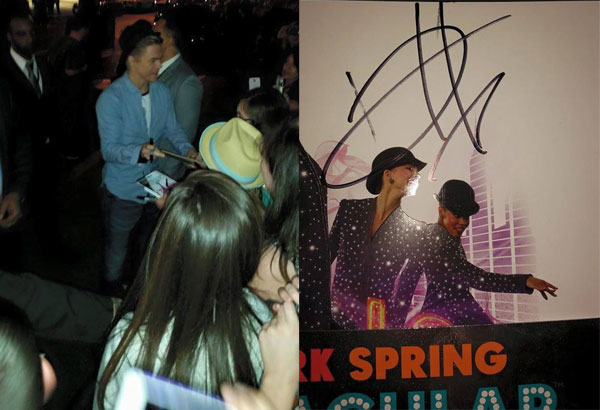 Derek Hough signing autographs outside Radio City … along with the one that I got on my collector’s program.

The show is scheduled to end May 7. Derek’s recent DWTS injury has him out of the show indefinitely. Hopefully he’s able to get back in before it closes. But it’s worth it to see either way because the dancing throughout is fantastic and I’m sure Derek’s understudy is up to the task. 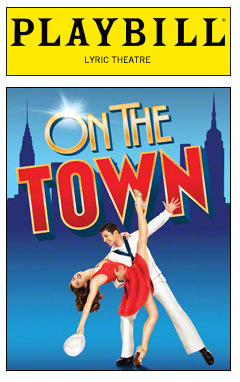 Will caught this back in October and I’m glad I was able to catch it on this trip. I don’t understand why this critically acclaimed On the Town revival hasn’t done better at the box office because it’s sublime.

First off the dancing is stunning from the very opening. The athletic cast tackles “New York, New York” with gusto and it sets the tone. There’s some beautiful softer moments as well with the act one finale of the Times Square Ballet and Act Two’s Pas de Deux, which was the best single dance moment I saw during this trip (yes, that includes anything that happened at Radio City). Choreographer Joshua Bergasse did a great job keeping a Jerome Robbins feel while creating new dances for the show.

This revival captures both the madcap comedy in the show as well as the softer romantic pieces very well. The last revival we saw, in 1998, seemed more focused on the comedy.

I was happy to see So You Think You Can Dance season 11 winner Ricky Ubeda in the cast. The show’s dance style was right in his comfort zone and he was spectacular. He was also funny during the night club sequence in act two as he sat at a table with a couple other sailors and a girl. They were consistently being funny…not sure of it was ab lib or planned business, but I enjoyed it.

I was a fan boy again here. I got most of the principal cast to sign my Playbill. Sadly Ricky didn’t come out the stage door. Word was he had family in town and went out a different door with them, and that’s understandable. Hopefully this is just the first Broadway show for him. 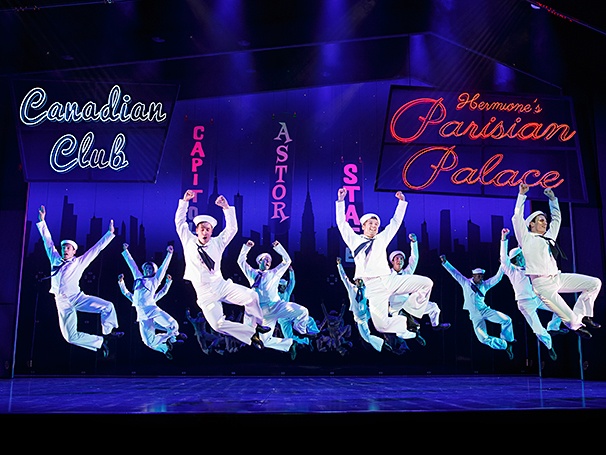 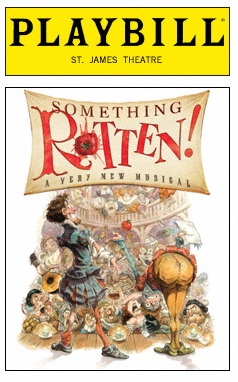 I didn’t quite know what to expect of Something Rotten, but I’m glad I pounced on the ticket when I had the chance. This show is brilliant. It takes place in the Renaissance and here Shakespeare is a superstar with a rock star swagger (think Mick Jagger) and his arch rivals, the Bottom Brothers, are desperate for a hit. Older brother Nick visits a soothsayer, first to find out what the future says will be the next big thing on stage (musicals) and next to learn what Shakespeare’s greatest hit will be (Omelette). Yup, poor Nick gets some misinformation about the future… Hamlet / Omelette, it’s an easy mistake to make.

The cast is incredibel! Christian Borle as Shakespeare, Brian d’Arcy James as Nick, Heidi Blickenstaff as Nick’s wife (and she needed more to do just so she could sing some more) and Brad Oscar as the soothsayer are just a few of the talented players on hand make all the comedy look easy. Director Casey Nicholaw, whose last Broadway show was Aladdin, pulls out all the stops to make this smart, hilarious musical soar.

I don’t want to give away more than I already have. If you’re in NYC anytime soon, plan ahead and buy a ticket. It’s been on tkts occasionally, but once it opens and the award nominations start to flood in, this will likely be a hard ticket to get. I’m hoping I can take Will when we’re in town in May. 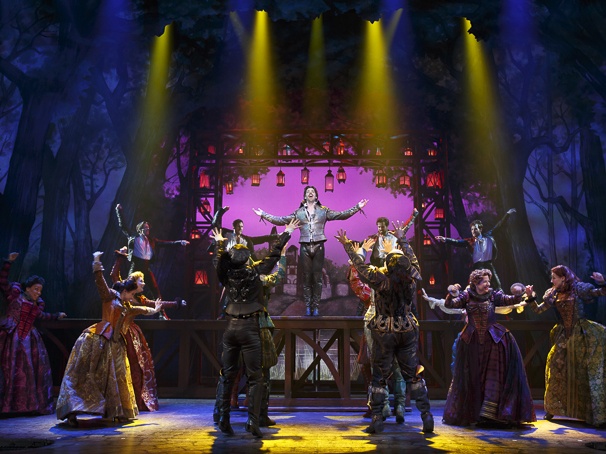 Shakespeare as rock star in Something Rotten 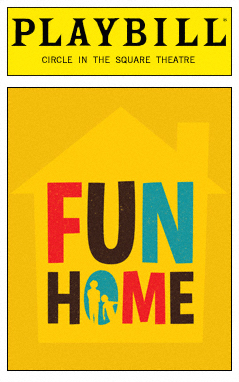 This was a challenging show. It’s about a family that runs a funeral home and a dad who also teaches English at the high school and restores houses… And he has affairs with men. There’s a mom and three kids. The story is based on a autobiographical graphic novel by Alison Bechdel, and the story here focuses entirely on the relationship between her and father and why he committed suicide.

I liked the show, especially the music and the performances. But it also felt off because of the primary focus. Mom and the siblings get virtually no part of the action. They’re present, but since it’s not about them they have little impact on the show. There’s also no real closure. I saw the story, but, at least for me, I didn’t understand what I was supposed to take away from having witnessed it.

In a cast that includes powerhouses like Michael Cerveris and Judy Kuhn, the standout was Sydney Lucas in the role of the Small Alison. She was incredible with her singing and acting as the girl who had her father wrapped around her little finger. It’s easy to see why she was the youngest Obie winner ever. Cerveris was excellent, as always, and it was great to see him drop into madness and crackup because he does that so well. Kuhn was solid but underused. Emily Skeggs and Beth Malone were Middle and present day Alison, with Malone serving as narrator as well since she’s trying to create the story she’s telling the audience.

The critics are ga-ga for this show. As I said, I liked it, but maybe I’d need to see it again, or listen to the CD, to more fully get it. (Have I become so old now that I no longer get the hip show? Hope not…) 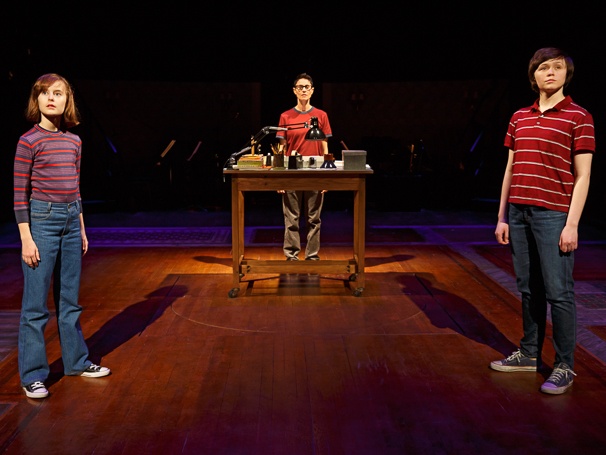 The three Alisons together in Fun Home