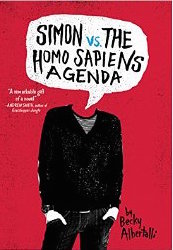 Entertainment Weekly gave this an “A” in it’s “Books Quick Takes” and this line made me pre-order the book immediately: “Savor it, because you’ll read it for the first time only once.”

Did I savor it? Not as much as I wish I could. I picked up the audiobook because I knew I was doing a road trip to San Francisco this week, so it played out for nearly seven hours on its own pace. I’m not sure, however, if I was reading the physical book if I would’ve been able to put it down too much. The story of Simon who knows he’s gay but isn’t out yet and his friends and his anonymous pen pal (who he is out to) and his whacky parents was a perfect portrait of what must go on in high schools all the time.

There are deep friendships, feelings that are hurt way too easy, bullying, blackmail and first love (sort of two love stories here, though one is in the secondary story but it was still super cute) and the angst of coming out over and over again.

The main story is that Simon is pen pals with someone he knows as Blue. Blue goes to his school, but Simon doesn’t know who Blue is and Blue doesn’t know Simon. Simon, however, made the mistake of not logging out of Gmail on a public computer and a classmate, Martin, discovers the emails, and uses them to blackmail Simon to help him get a date with Abby. It’s a mess. Simon slogs through it, becoming more obsessed with Blue as their email connection deepens. But, he’s got the real world to deal with too, including a production of Oliver, evolving relationships with his friends and, of course, the blackmail dark cloud hanging over his head. I’m not going to delve too deeply on plot points here because this is one that everyone needs to let it unfold for themselves. It’s too difficult to talk about one thing while worry about spoiling another.

I went back and forth between smiling at what was happening and occasionally getting upset. Sometimes Simon just does the complete wrong thing and I just wanted to say nooooooooooo. But that’s part of what being a teenager is about. As this plays out over a few months, including the Christmas holidays, Albertalli gives us such full, dynamic characters that you feel the weight of the events on Simon, which is also helped by the use of first person/present tense. In the last forty five minutes, I smiled and cried because of the perfect ending that played out before my ears.

I may have to pickup the book just so I can read it again to savor it more. I know there were lines in here I’d want to make note of, which you just can’t do when you’re driving and listening. I know it would be a pleasure to read Simon’s story over again and pick up even more of his nuances. Thanks for a great first book Becky Albertalli. I look forward to reading much more from you.