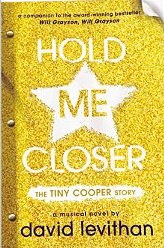 I devoured this book. I do that with David Levithan books. Which is sad in a way because it means I’m done with it way too soon. Levithan’s latest, Hold Me Closer: The Tiny Cooper Story, was wonderful. It is exactly what the cover promises, a musical novel.

This is companion to Will Grayson, Will Grayson, the 2010 novel he wrote with John Green. It’s a companion because towards the end of WG, WG, this musical is staged. Here we get the whole show, going from Tiny’s birth through some events that are in WG, WG.

This is unlike any novel I’ve read. It’s formatted like a musical script with stage direction, notes from the author, dialogue and lyrics. Not surpassingly given my theatre geek status, I ate this up. I’ve said in other reviews of Levithan books that I love the way he constantly morphs his storytelling style, and this is no different. With the brief glimpse of Tiny’s musical in WG, WG you knew there was something pretty awesome there and to see his character get fully fleshed out in a musical was great. Going all the way back into his childhood and watching how he came out, became a football player and went through all the boyfriends was perfectly done. The expanded director’s notes also gives insight the “show” doesn’t and how Tiny really felt about some things going on in his life. Like all of Levithan’s books, the story carries much power and poignancy.

I have to share some of my very favorite lines from this show:

“We all thing we are actors, given our scripts. But really? You’re the playwright. You’re the composer.”

“I’ll be your day off, your stopped clock, your glorious reprieve.”

“It’s all about falling–you land and get up so you can fall again.”

“He was pompous and pretentious and I still would have iambed his pentameter for five acts or more if he’d let me.”

“But you only have so many words in your life, Tiny, and rather than giving them all away, you should keep some for yourself.”

“I learned an important lesson: that just because a boy can recite the full track list to the [title of show] cast album, doesn’t mean that he necessarily knows what the title of his own show is going to be.”

And a line that really spoke to my creative side: “I have to believe we have enough songs in our hearts for endless musicals, about an endless number of things. And it’s fun, every now and then, to let them out into the world.”

I’m curious to see how other readers react to the book and it’s unusual style of storytelling. Hopefully they’ll embrace it and love everything about it. Meanwhile, I’d love to see an audiobook done that would include full performance of the songs. Maybe someone will really turn it into a musical? I’d definitely go see it.