I’ll Give You The Sun by Jandy Nelson 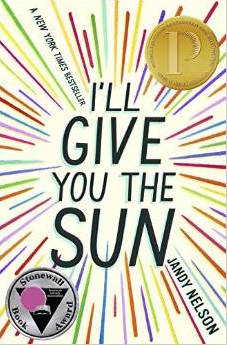 I finished reading (or rather listening to) Jandy Nelson’s I’ll Give You the Sun a week ago. I’ve been trying to figure out how to adequately talk about this book. To say that it’s one of the best books I’ve ever read (and I’m just going to stick with read from here on) doesn’t seem to really cover it.

The book centers on twins Noah and Jude who live with their family in coastal Northern California. The story covers roughly three years, from ages 13 to 16 with Noah narrating ages 13 and 14 and Jude telling the story at 16, with alternating points of view.

While Noah tells the story, he’s insanely artistic, often in his own very colorful world, but also falling in love with the boy next door, too.  He loves is mom, thinks his dad hates him and gets along pretty well with his sister. The two of them are trying to get into an arts high school, although Noah wants it far more than Jude does. As the story jumps forward, Jude’s struggling at the arts high school while Noah’s lost his creative spark. Something’s gotten out of whack in the intervening years.

Nelson does an incredible job across the board here. Noah is first up and understanding the world through his eyes, with the bursts of color and brightness he does is unlike anything I’ve read. I would love to see the world as he does. He loves his world and what he creates–both on paper and in the museum in his head. His friendship/crush on Brian is vivid, just like everything else. The bond he shares with his sister does show signs of strain as she’s transitioning into a wild phase. Jude’s chapters are vivid too, but very different. Life has changed radically while she’s telling the story and while most, but not all, of Noah’s chapters are full of color, her’s are more muted and cautious.

The way the plot unfolds here is great. Sometimes story telling that isn’t linear gets confusing. Here, Nelson weaves things together perfectly and feeds the reader nuggets of information at just the right time. There are things Jude comments on that Noah might shed light on in his narration, or that she’ll reveal in a later chapter. The criss-cross of supporting characters along with the various sub-plots made this book nearly impossible for me to set aside. This was a book that had me alternately laughing and crying.

I have to give praise to the audiobook performers as well. Julia Whelan (as Jude) and Jesse Bernstein (as Noah) brought this book to life. In particular, Bernstein captured Noah’s excitement for art and his creative endeavors so well. They both, however, do a perfect job bringing Nelson’s complex, riveting and powerful story to life.

Based on the excellence of this book, I’ll be checking out Nelson’s backlist and any future books for sure.