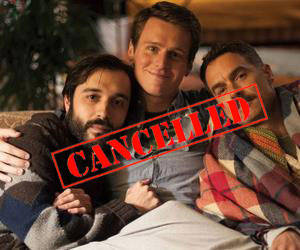 Last Sunday’s season finale of Looking officially became the series finale as HBO recently announced that a third season will not be forthcoming. This isn’t shocking news considering the low ratings, the show never really seemed to catch on.  Looking had it’s detractors as well as it’s avid supporters (I’m in the latter camp) and the good news seems to be that HBO is willing to do a movie to wrap up the series, not unlike Noah’s Arc, another good (but under appreciated) gay show.

The final episode showed how much the characters grew from the generally unlikable bunch of season 1 into adults who needed to start making grown-up decisions.

Dom and Doris (Sweet Jesus how much do I love Doris!) decided that they were just a little too Will & Grace for their own good and needed to start living their own lives (while remaining friends).

Agustin, the insufferable failed-artist self-destructive dickhead, was transformed by the power of love when he fell for irresistible poz bear Eddie (OMG how much do I love Eddie!) becoming one of the most likable guys on the show.

Patrick’s fate was the most interesting and ambiguous. After moving in with Kevin, they spent most of the episode arguing whether to be monogamous or “open”. It was good that Patrick finally came to the big-boy realization that no matter hot your British boyfriend is (Russell Tovey… I love you!), no relationship is going to be sunshine and rainbows all the time. Patrick and Kevin were still a couple by the end of the episode, but Patrick did go see his ex-bf Richie, the barber with a heart of gold, the next day. Make of that what you will.

I really enjoyed Looking for it’s limited run and will look forward to the movie (if it ever comes to pass).

Though, in my heart of hearts I really want Agustin and Eddie to get their own spin-off show. Imagine a post-millennial update of Facts of Life with Agustin and Eddie in the Mrs. Garrett role, looking after a group of precocious trans kids. There would be love and laughter and tears, and maybe a very special episode or two.