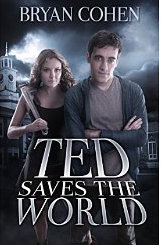 Ted Saves the World by Bryan Cohen was a wild, fun ride.

The book centers on Ted, a high school student who ends up with super powers that let him move objects and people, and even his own body to help him defeat some otherworldly bad guys. The setup is a simple one. An army of dark souls are looking to take over Earth. They can get here by taking over the bodies of the recently deceased. The light souls can do the same, but they also need Ted, who is the living soul.  The living soul has special powers that can help stop the war, but at the same time if he’s killed the barriers between the worlds drop and Earth is doomed.

Ted’s got help saving the world too. Erica, his former girlfriend has been killed and ends up possessed by a light soul to train and protect Ted. His best friend Dhiraj helps out, providing media support along with some other skills. Ted’s most recent ex, Natalie, doesn’t quite know what’s going on and her journey through the book is not an easy one (not that anyone’s is, but she’s got some interesting things to overcome).

This is one of those books that’s very hard to talk about because it’s packed with adventure and I don’t want to slip and give up anything. I don’t read a lot of sci-fi these days because the world building can get tedious. Here, you get the details in bite-sized portions when you need to know them rather than a lot of exposition dropped on you all at once.

Cohen creates great characters, too. Ted goes form a kid who’s sort of just shuffling along with no real ambition, until he ends up putting his powers to use. His first time out is very public, so now he’s got the world saving thing to do, plus everyone wanting a piece of him. Dhiraj reminds me of the ambitious college students out of the Social Network, eager to create a business to make some cash. Erica and Natalie could both be Buffy (in fact, the covers for this series makes me think of Buffy). The stakes run high through out the book, which I like since it keeps you on the edge of the seat. I finished the book in record time because I had a hard time putting it down.

I’m looking forward to reading the other books in the series–parts two and three are out now (and waiting for me in my Kindle) and a fourth that’s coming in April (that I’ve already pre-ordered). I’m looking forward to seeing how Ted and his friends continue to save the world since book one leaves off with the door wide open for book two.