Jack & Louisa: Act I by Andrew Keenan-Bolger and Kate Wetherhead 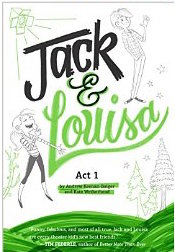 I was predisposed to love Jack & Louisa: Act I by Andrew Keenan-Bolger and Kate Wetherhead. First, it has musical theater as a backdrop. Right on page one there’s reference to Into the Woods, the first of many such references. I love the author’s other endeavors. Andrew Keenan-Bolger and Kate Wetherhead are co-creators of the awesomely funny Submissions Only web series. I’ve seen them on stage too–Keenan-Bolger in Newsies and Weatherhead in Legally Blonde. It all added up to a book I had to get.

Technically it’s a book for young readers–targeting in the 8-12 year old range / grades 3-7. But, I say, whatever. It was a delightful story. As the book opens, 12-year-old Jack has just been fired from a starring role in a Broadway musical because his voice changed and, since his dad recently got a job in Cleveland, they’re leaving NYC behind for life in the midwest. Louisa turns out to be Jack’s new neighbor. She’s a bonafide MTN (musical theater nerd) and she’s on her way back form theater camp as Jack is headed to his new home.

The story, told alternating between Jack and Lousia’s POV, centers on Jack and Lousia becoming friends (or trying to be, their first encounter doesn’t go off well) and Jack trying to find his place as the new kid. Does he play sports or does he go the theater route? For Louisa she’s got to figure out how to be a good friend when Jack wants to hide the part of himself she really wants to be friends with. Oh, and there’s this little issue of auditions for a local production of Into the Woods, too!

I liked how Jack’s evolution and confidence grew at school, and how Louisa learned new stuff about being a friend.

Last year I read Tim Federle’s Nate books–Better Nate Than Ever and Five, Six, Seven Nate!–and anyone who liked those books will like this one.  I’ve read that Jack and Lousia will be a series, and I look forward to future installments (maybe … in a crossover world, Jack and Louisa could meet up with Nate and his BFF Libby…after all Federle has a great quote on the J&L cover).