The Last Five Years – The Movie 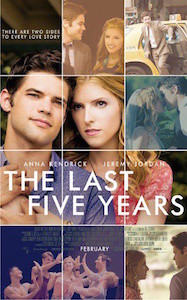 I’ve been a huge fan of The Last Five Years since I saw it off-Broadway in the spring of 2002. I saw it twice and became fans of Jason Robert Brown musicals as well of its lead actors Sherie Rene Scott and Norbert Leo Butz. The show is pretty much all music–gorgeous music–as it tells the story of the five year relationship between Jamie and Cathy. The story telling mechanism is unique, however. As the show starts, Cathy is at the end of the relationship and Jamie is at the beginning. As they move through time, they only come together at their wedding before they drift apart again.

I enjoyed the 2013 Off-Broadway revival, as a chance to revisit the story live. This new film version, starring Anna Kendrick and Jeremy Jordan, which released yesterday in limited theatrical distribution and video on demand (I got mine on iTunes) is stunning. I wasn’t sure they could capture how time keeps shifting, but director Richard LaGravenese made it work, and his casting was perfect.

Anna Kendrick has shown off her musical chops in the Pitch Perfect movies and Into the Woods and her Cathy is great. She captures Cathy’s thrill and the new relationship and then (in a Star is Born-esque plot) the struggles as her husband’s writing career takes off while her acting career stagnates. Jeremy Jordan, a Tony nominee for Newsies, takes Jamie on a great journey of his own as the relationship with Cathy starts at the same time his writing takes off.

The film opens up the story in wonderful ways the stage show never could. As the songs play out, you see scenes from Jamie and Cathy’s life that drive home how happy they were and how broken the relationship became. It’s romantic and heartbreaking at nearly the same time since you slide from a happy scene into a troubled scene. LaGravenese added just enough material to tell a cinematic story without loosing the elements that made the stage musical so magical and powerful.

I’ve always loved “The Schmuel Song,” but Jordan’s performance is the best I’ve seen and the expanded take on the scene, with Cathy’s reactions and side comments added to the magic of this song. Jordan and Kendrick coming together for “The Next Ten Minutes” was beautiful, especially with the Central Park scenery. Both actors play their final relationship scenes — “Still Hurting” for Kendrick and “I Could Never Rescue You” for Jordan — looking like the weight of the world is on them as everything comes to an end. Kendrick is a hoot on “Climbing Uphill/Audition Sequence” as we see her trying to find work.

This is one of the best stage to screen adaptations I’ve seen. It’s faithful to the source material, but expands on it in some wonderful ways. I do wonder how it’ll play for people who aren’t familiar with the show and how it tells it’s story, but for me it worked. I’m thrilled to see one of my favorites make such a successful transfer to another medium.