Attack of the “Epic” Movie Trailers

For Thanksgiving we all got besieged by two movie trailers for movies that are supposed to be big deals in 2015.

The funny thing about this trailer was that there was a trailer for the trailer running for a while so that people would tune into football Thanksgiving night on NBC to see it. I waited until the next day to catch it on YouTube. I’m excited about this movie. It seems to have the vibe of the original. I liked The Lost World (aka Jurassic Park 2), but didn’t much care for Jurassic Park III, which seemed to lack inspiration. In Jurassic World, with the park actually opened and the threat posed by the mutant dinos… that sounds like a pretty fun combination for an afternoon at the movies. 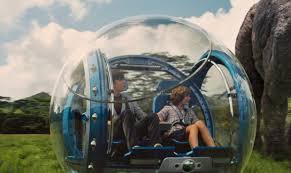 I loved this image too, maybe my favorite in the trailer. What a fun way to zip around the park and get up close while, I’m guessing, being completely safe from the giant creatures. Imagine doing the Disney Animal Kingdom Safari in something like that!

Oh…the other thing I loved in the trailer was the paino-only version of the original Jurassic Park theme that came right at the end. It was beautiful, and a little bit haunting.

Yeah, the trailer is cool, all jam packed with spiffy special effects. However, I’m still burned from the crap that was Episodes I, II and III. Those had spiffy special affects too, but were horrible films. Adding to my trepidation is that I find J.J. Abrams to be an inconsistent story teller. Examples: I loved how he re-booted Star Trek, only to find the second film disappointing. I loved Alias, but got worn out on Lost.

We don’t get much idea of plot here, what little narration is present merely hints at a showdown between the dark side and the light, which is to be expected.

The shot of the Millennium Falcon in flight, however, was just what this fan of the original trilogy needed to see. It makes me hold out some hope that maybe this movie will get it right. As I posted on Facebook when someone was talking about the trailer–“Well that might be okay…”

We’ve got about 13 months before we get to see. I’ll defiantly be reading reviews before considering going to the theater though to see what kind of film I’m in for.