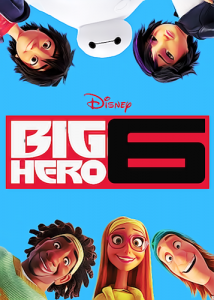 The commercials didn’t always make sense to me in terms of what this movie would be, but the story is wonderful. Everything  you’d want in a Disney film. Hiro loses is older brother early in the film and is left only with his first aid robot creation, Baymax. Hiro also discovers that his own micro robot invention, which he thought was lost in the same accident that killed his brother, were stolen. In this origin story, he bands together with other students to find out why the bots were stolen, and hopefully discover what happened to his brother.

One of my favorite things about the film is how diverse it is. Disney’s been getting  better in the past few years about making sure that not everyone is white and in Big Hero 6 there’s boys and girls of equal talent and spread among a few ethnic groups all working together. Baymax is also a brilliant sidekick. What kid wouldn’t want a robot they could program to become a ninja? Thankfully there’s also a good dose of morality that works into the film without getting preachy or heavy-handed.

This is a very satisfying origin story. Hopefully it does well enough to green-light a sequel that is just as fun and heartwarming (yes, I cried a couple times during the movie…as did the kid sitting down the row from us). I also need to find out more about the Marvel comic this is based on. My understanding is the comic is darker than this Disney-ized version, so that might be worth checking out too.