“Other Desert Cities” at Redwood Curtain 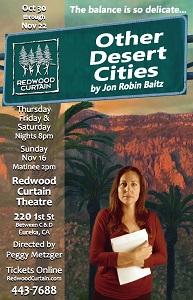 Other Desert Cities is the first show we’ve seen at Redwood Curtain where we’ve also visited the original Broadway version. The cast, anchored by Cassandra Hesseltine in the central role of Brooke Wyeth, delivers solid performances portraying a family teetering on the edge.

Playwright Jon Robin Baitz tells the story of a Hollywood-raised family. Mom and dad  are staunchly right wing and have worked closely with the Republican party over the years. Their children, however, are very liberal. Daughter Brooke  has recently gotten out of rehab and is getting ready to publish her long-awaited second book. Their son Trip works on a TV court room show. There other member of the household is mom’s sister, Silda, who fell off the sobriety wagon and is living with her sister to get back on her feet.

Sparks fly early as the family gathers for Christmas Eve in 2004 in the parent’s Palm Springs compound. Brooke knows the book she’s written about her older brother, who committed suicide in the 70s after being involved with radicals who blew up an army recruiting station and killing a man in the process. The book is her perceived account of what happened, along with Silda’s who provided some additional information. It doesn’t match up with the perceptions of mom or dad, or with younger brother Trip.

The first act dances around Brooke’s post-rehab condition and the book in general. Sparks fly in act two after mom has read the book. Act two is where the company of actors really get to dig in, too. Bernadette Cheyne as mom Polly is a force to be reckoned with once she reads the book and see what has to be done to protect the family. Cheyne, along with Lincoln Mitchell as dad Lyman, deliver on the strong emotions as they try to convince Brooke to not publish the book. Lynne Wells as sister Silda provides some much needed comedy, but also some sage advice in the proceedings. Wells delivered just the right touch.  Charlier Heinberg’s brother Trip tries to keep everyone from saying something they’ll regret with a glibness that you image Trip has honed through years of dealing with his parents. Heinberg plays this great as you can see the pain he’s in under his shiny veneer.

The spotlight here belongs to Cassandra Hesseltine. She rides the emotional roller coaster to perfection, particularly in the second act showdown. Brooke doesn’t want to back down, but doesn’t want to destroy her family. She knows her truth she’s desperate to have it validated. The scenes between Hesseltine and Cheyne crackle with passion, while Hesseltine’s scenes with Heinberg are more down to earth and sometimes funny.

Director Peggy Metzger did a great job finding the emotional balance in this show. She’s worked with the actors to deliver the proper punches in a show that can be uncomfortable to watch as the family lays itself bare to one another.

Other Desert Cities continues weekend through November 22. You can get information on the schedule and tickets here.