“Vanya and Sonia and Masha and Spike” at Redwood Curtain 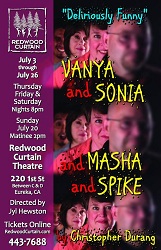 We didn’t see Vanya and Sonia and Masha and Spike during its Broadway run so we were thrilled when we saw it running at Redwood Curtain and could make it our first show back in Humboldt County.

The Christopher Durang comedy was performed to perfection by the six person cast. The story centers around Vanya and Sonia, siblings (although Sonia’s adopted) who have lived in the same house since childhood. They took care of their ailing parents there and have never left, even after the parents passed away. As the show opens, the brother and sister are spending a morning lamenting about the lives they haven’t led.

When older sister, and the payer of the bills, Masha, shows up with the intention of selling the house, more rivalry ensues. Mixing it up even more is the fact that Masha arrives with boytoy Spike, who has a wandering eye. Neighbor Nina ends up in the mix as well.

The result of all this is a biting comedy that also has some striking social commentary as well as some very touching moments.

Raymond Waldo as Vanya was extraordinary. Vanya goes through so many swings of emotion, Waldo is on a roller coaster from the moment the show starts. Particularly impressive is the late show rant he goes on about how much things of changed in his life, and not for the better. It was a much better time when we mailed letters rather than sent texts (and I can’t say I completely disagree with this).

Christina Jioras as Sonia was heartbreaking as the adopted sibling who feels at times like she doesn’t belong in the family. While Vanya gets the end-of-show rant, Sonia has an incredible phone call with a potential male suitor she meets at a costume party. Sonia is so stressed with the call, she almost doesn’t set up a date, but she ultimately does. Jioras struck the perfect emotions throughout the show, but the phone call was a sublime performance.

Gloria Montgomery’s Masha had quite the journey of her own. She initially seems like a ungrateful older sister who doesn’t care about her siblings, but by the end of the show she reconnects beautifully with her brother and sister. The catalyst for everything is the mystical housekeeper played to hilarious perfection by Nadia Adame. She was wonderful as she prophesied throughout the show. Geo Alva as the Spike was easy on the eyes (he was often in his underwear) and played the slacker wannabe actor hysterically. The boy didn’t quite know what he wanted, seemingly smitten with Masha, but also neighbor Nina as well as possibly Vanya. Nina, played by Mira Eagle, seems like an underwritten part given what the other five have to play, but Eagle plays her role great–especially as she portrays a molecule within the apocalyptic play Vanya’s written.

If you’re up in Humboldt during July, grab a ticket to this wonderful comedy. Performance dates and tickets can be seen at redwoodcurtain.com