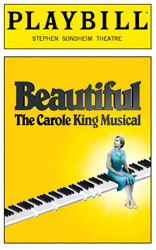 I’m not sure why it took us so long to see Beautiful: The Carole King Musical, but we finally saw it yesterday afternoon. It was wonderful–packed full of so many classic songs as well as a stunning, powerhouse performance from Tony winner Jesse Mueller as the iconic singer/songwriter.

The musical covers the time from when King sold her first song in the late 50s through her solo Carnegie Hall debut in June 1971. Initially she works with Gerry Goffin to write hits like “Will You Still Love Me Tomorrow,” “Up on the Roof” and “One Fine Day.” King and Goffin get married early, she’s only 17, and have two kids. As their songwriting career grows, so do the issues in their marriage as Goffin feels like he can’t be satisfied with what he’s got.

Their friends, and writing competitors, Barry Mann and Cynthia Weil write hit songs in the office next door. These songs include “He’s Sure the Boy I Love,” “On Broadway,” and “We Gotta Get Out of This Place.” There’s also tons of classic acts portrayed in the show: Neil Sedaka, The Drifters, The Shirelles, Little Eva and Marilyn Wald. 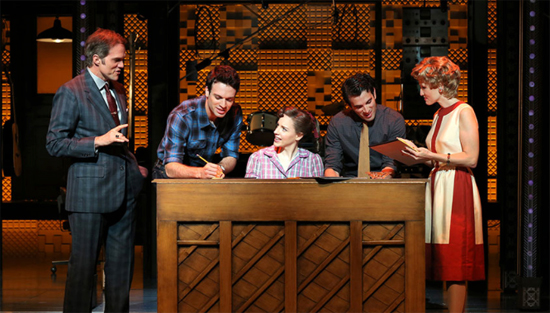 I knew a good bit about King & Goffin and Mann & Weil because of a Rock & Roll class I took the summer of my freshman year in college in 1987. Taught by Dr. James Salem, the class spent quite a few sessions on the Tin Pan Alley scene of the 60s where these four, and many others, wrote the hits of the day. I throughly enjoyed this history lesson come to life. What the class didn’t cover, and was so heartbreaking in the play, was the stress that Goffin and King went through as their marriage fell apart. It was sad that Goffin knew he was making the wrong choices, but couldn’t seem to do anything to stop them.

Mueller and Jake Epstein (playing Goffin) have great chemistry. You can see them fall in love with each other and then watch as they both feel the pain of what happens. Epstein delivers a great performance, showing Goffin’s battles with panic attacks. Anika Larsen and Jarrod Spector as Weil and Mann are delightfully playful as they get their career partnership and romance going. Jeb Brown plays producer Don Kirshner and he’s often a father figure to the quartet as they grow up. 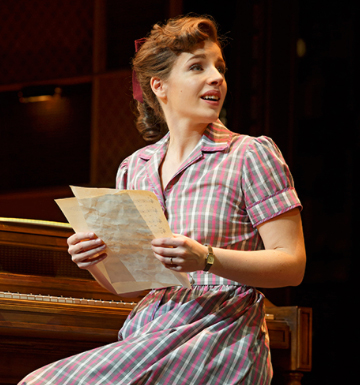 I have to give a nod to the sound design of this show too. Brian Ronan won a Tony Award for the design and it’s much deserved. He captured some of the different sounds the music had back then. Especially impressive was recreating, in the theatre, the Phil Spector Wall of Sound for the Mann/Weil song “You’ve Lost that Loving Feeling” sung by the Righteous Brothers. Josh Davis and Kevin Duda, who each play multiple roles in the show, sang the song great and the sound design really presented that particular sound so well. (It’s a shock to me that the Tony Awards committee have announced that they are dropping the Sound Design categories going forward from the 2014-15 season. It’s a shame that work, like Ronan’s, will no longer be honored.

Beautiful was a great way to spend Fourth of July afternoon. This show is highly recommended for a trip through rock and roll history, featuring some of the best music around.