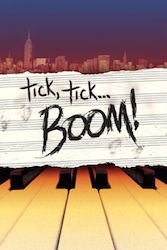 I first saw Jonathan Larson’s Tick, Tick… BOOM! in September 2001, the weekend after 9/11. The show was playing in the West Village at the Jane Street Theatre in an area that had just reopened for regular business. Even a couple days before the show, I was’t sure I was going to get to go because it was not clear what was happening with the frozen zones downtown. Not many people were at that show. I had a a ticket in the rear of the orchestra, but everyone was encouraged by the ushers to come down front and fill in around the stage. The show was incredible, starring Raul Esparza, Amy Spanger and Jerry Dixon. Its themes about following your dreams, and how life can be cut short resonated even more.

Last night, Tick, Tick began a five show run at City Center as part of it’s Encores! Off Center series, which brings back off-Broadway musicals that haven’t been seen in a while. I couldn’t miss this run because I love the show and I knew the stellar cast–Lin-Manuel Miranda, Karen Olivo and Leslie Odom Jr.–shouldn’t be missed. 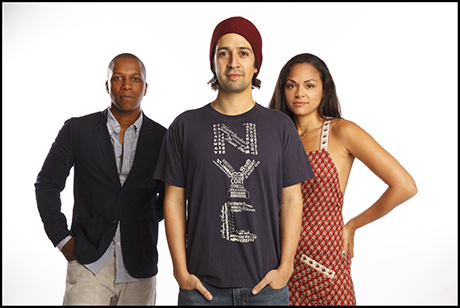 The evening exceeded my expectations. The music and the show deliver such powerful messages about following your dreams, the power of friendship and love, the impacts of loss. Miranda, whose been quoted often in the past week about how the original show impacted him, delivered an emotional performance. You could tell the show means a lot to him. Olivo blew the roof off City Center with her rendition of “Come to Your Senses.” I’ve never heard the song soar quite like that (you get just a bit of this song in the video below at 2:11). Odom, as best friend Mike, was heartbreaking as he makes his revelation of Jon that “Real Life” has caught up with him.

All wasn’t quite right with the show, however. Miranda’s head mic went on the fritz late in the show and it ultimately was replaced on stage while Olivo and Odom improved for a minute or two. It was hilarious as they riffed on Twinkies (which had just been sung about), George Orwell and the Larson musical Superbia. It one point Odom asked Olivo if she knew any dances from that show. She made it clear she did not. The audience ate all this up. Miranda also did a series of great Tweets about the incident post-show:

2) Someone handed me a stick mic, which allowed me to get through the next scene, but it's a temp fix, since I have to play piano later…

3) but I don't leave the stage the whole show. So they replace my mic upstage as @leslieodomjr and @Karenolivo improv GLORIOUSLY…

4) and when I get back, my next line is LITERALLY "rehearsal goes well. I think we'll be ready for the performance Thursday." PANDEMONIUM.

5) Oh, I did do a (very appropriate) mic drop, when I had one in my hand. But I caught it with the other hand, mic drop objectionists!

Tick, Tick… BOOM! plays tonight, Friday and twice on Saturday before it’s gone. I can’t recommend this enough if you’re in the NYC area.