This past Sunday we finally got to see Disney’s Aladdin on Broadway. We’ve had the tickets for a while having decided to make it part of my birthday week. The show is absolutely spectacular, living up to its hype.

While the show is the story of Aladdin, the show belongs to the genie. James Monroe Iglehart deserved the Tony he won earlier this month. His high energy singing and dancing combined with his infectious personality make this show fly. I wasn’t sure how the creative team would match Robin Williams’ vocal performance from the animated film, but Iglehart makes the genie his own and it is a masterful performance. Most impressive is Iglehart’s singing voice, which is so rich and powerful. From the opening “Arabian Nights” into the tour de force of “Friend Like Me” (which plays so much better in the New Amsterdam in its full version than the truncated version that was on the Tony telecast), “Prince Ali” and the new “Somebody’s Got Your Back” Iglehart is stunning.

In the role of Aladdin, Adam Jacobs is also great. His chemistry with Iglehart is spot on as he takes in all the wonders the genie has to offer. Plus he plays the transition form street rat to smitten prince who has to eventually come clean with the prince perfectly. His voice wraps around the familiar “One Jump Ahead” great and he’s really incredible with the new song “Proud of Your Boy.” 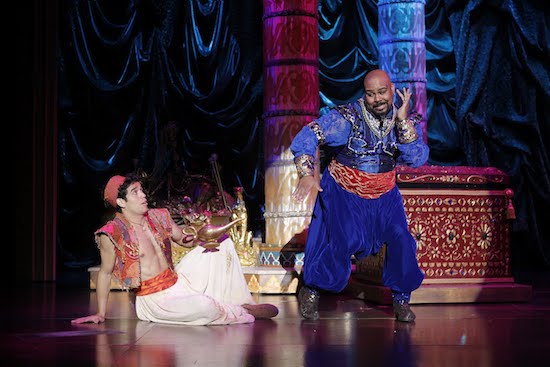 I was sad we didn’t get to see Jonathan Freeman as Jafar. He was the voice of Jafar in the film, and is playing it on Broadway, but he was off on Sunday. Courtney Reed’s Jasmine was good, although her singing couldn’t match to the memory of Lea Solonga from the film soundtrack.

Disney made several smart changes bringing this to the stage. Rather than a parrot, Iago is Jafar’s human henchman and he’s just as annoying as the bird was (in a good way). The monkey is gone, which is a smart move rather than dealing with an animal or a puppet. The carpet isn’t a companion either, but it is a great piece of stage magic as it flies Aladdin and Jasmine around during “A Whole New World” and again in the finale (I looked hard for the wires, and couldn’t seem them…so well done on that). The genie’s appearance is smartly done through trap doors in the stage. And while the “magic” is kept to a minimum, the overall spectacle of it all makes it feel like you saw more than you really did — a very impressive illusion.

Best of all Disney made a very entertaining, living and fast pace two hour, fifteen minute show out of what was a ninety minute film. One of my only complaints about The Lion King is that, despite it’s incredible use of puppetry, the expansion of the story leaves it feeling stretched at times. Aladdin does not suffer that problem. When Aladdin is done you’re saying “awww….it’s over already? I want more.”