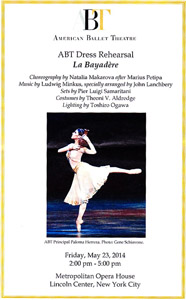 Ballet season is here and we opened our spring season with a treat. Because we’re supporters of American Ballet Theatre, we got the opportunity to attend a working dress rehearsal yesterday afternoon for this week’s performance of La Bayadere.

The ballet itself was great. I hadn’t see this one before, although Will saw it in 2012. I particularly enjoyed the second act dream sequence as well as the vengeance of the gods that happens in act three (which, I have to admit, I thought was a meteor shower rather than the temple crashing down). The first act also had some beautiful dancing, especially in the third scene as Nikiya’s dance is gorgeous.

The dress rehearsal aspect of this was fascinating to watch. With the curtain up as we arrived, as well as during intermission, I got to watch the stage hands and dancers at work on stage. Even though the dancers have all done this La Bayadere before, there are plenty of notes given, which mostly seemed around being in the right place on the Met’s large stage. There were even a couple places where they were working with the lights and even making some modifications to the orchestra. In the third act we even got to see two Bronze Idol’s run the number back to back, though one was in full costume and the other in shorts and a tank top. The principal cast changed in each act as well, which I suppose allowed the maximum number of people participate in the rehearsal.

For the rest of our ABT season, we’re seeing Manon on June 7 and Cinderella on June 14. It’s a shorter season for us this year because we’ve been subscribers for so long now, we’ve seen many of the shows. This season we’re focusing on works we haven’t seen before.