Revisiting “Out of the Pocket” by Bill Konigsberg 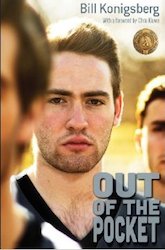 It’s been a treat this week re-reading Bill Konigsberg’s Out of the Pocket. The occasion for the re-read is that the book is just out in paperback and it has two bonus chapters plus a new forward by Chris Kluwe, a former NFL punter, and an afterword by Jim Buzinski, co-founder of Outsports.com.

I loved this when I read it when it first came out in 2009 (you can still read the original review). If it’s possible, I love it even more now, and in light of the recent headlines of Michael Sam becoming the first openly gay player drafted by an NFL team, the book’s more powerful than ever.

Everything I wrote about the book in the ’09 review stands. This is a brilliant novel. Konigsberg created a great character with Bobby Framingham, the high school football player who realizes he’s gay and is pulled out of the closet in the midst of his senior year. Bobby’s world is full of rich characters that run the gambit from some great friends to some not-so-nice teammates to adults that run a range of emotions as Bobby comes out.

What I don’t remember from the 2009 reading is being so emotional as I read. There were passages where Bobby freaks out in the aftermath of his outing that I found myself weeping. The part where his mom tells him that being gay was not what she’d planned for him really hit hard me since it brought up a memory of my mom telling me the same thing (luckily my mom moved past that). Despite knowing how the book turns out, I was cheering, and crying a bit, at the end too.

One of the bonus chapters jumps to the spring of Bobby’s senior year as he’s touring colleges and deciding where he wants to go. I loved getting  more of the story to see what became of Bobby. The other bonus is a cute interview with Bobby’s BFF Carrie.

The last paragraph of the book, part of Buzinski’s afterward, is also quite thought provoking in light of Michael Sam: “If Out of the Pocket was non-fiction, Bobby Framingham would have graduated high school, played college ball and become an openly gay NFL quarterback.” Indeed!

Buzinski continues: “If Bill Konigsberg ever writes a sequel, I imagine bobby inviting his NFL teammates to his gay wedding.” I’d certainly read that book too!