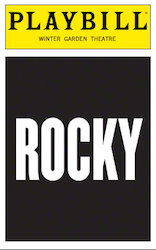 I’ve never seen the film of Rocky. I’ve seen parts of it, as well as parts of some of the sequels. That didn’t stop me from wanting to see how they took the love story/underdog story and brought it to the stage as a musical. The fact that it starred Andy Karl as the boxer was icing on the cake because it’s been enjoyable watching him grow from supporting roles–in Saturday Night Fever, Legally Blonde, 9 to 5 and The Mystery of Edwin Drood–into this stunning turn as leading man.

Karl is outstanding as Rocky Balboa. From the moment he first steps on stage he owns it and it’s no wonder he scored a Tony nomination for Best Actor. He looks the underdog part in just the way he carries his body. But he’s also got massive heart, that you here in the way he talks to people and the way he acts. It’s not always the tough boxer guy. Even as he gains confidence training for the big fight, he doesn’t loose that caring side.

Margo Seibert, in her Broadway debut, is also great. Slowly she brings Adrian out of her shell and allows herself to fall for Rocky, despite her abusive, mean brother. Watching Rocky and Adrian start their relationship was magical (just as you’d expect in a musical). In particular the scene at the skating rink in Act I and their Christmas time in Act II was perfection. 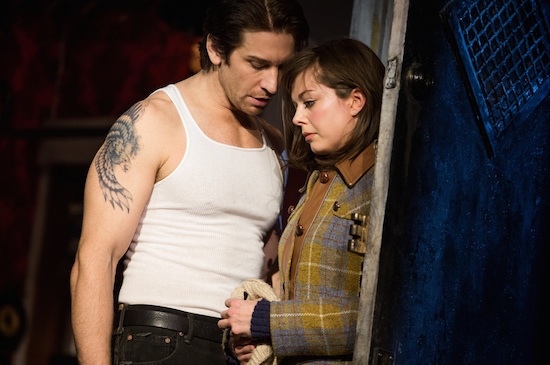 The music by Stephen Flaherty and Lynn Ahrens (known for shows like Once on this Island, Ragtime, Seussical and many others), found the right mix between big anthems for the underdog and sweet romantic songs for the new couple. Rocky and Adrian get two great songs together: “The Flip Side” and “Happiness.” Rocky sells his story in his first solo with “My Nose Ain’t Broken” and then delivers even more on “Fight from the Heart” and “Undefeated Man.” You get to know Apollo Creed with songs like “Patriotic” as well as his parts in “Eye of the Tiger” (yes, the Survivor song from Rocky III shows up here) and “Southside Celebrity.” Of course, the classic Rocky theme plays a few times too.

The centerpiece of the show has to be the fight. It’s an amazing feat of stagecraft how the theatre turns into Philadelphia’s Spectrum, including banners for the 76ers and Flyers. The first dozen rows of the orchestra are re-seated on the stage and the boxing ring comes out over those seats. A Jumbotron drops from the ceiling and the house is set for a fight. The choreography for the fight is incredible, as is the transformation of Rocky and Apollo from the start to the bloody, sweaty finish. It was good to see that the choreographers received Tony nominations for their work. The one thing about the fight that bothered me was that the TV graphics were of a 2014 variety rather than a 1975 variety. All those computer graphics didn’t exist back then. 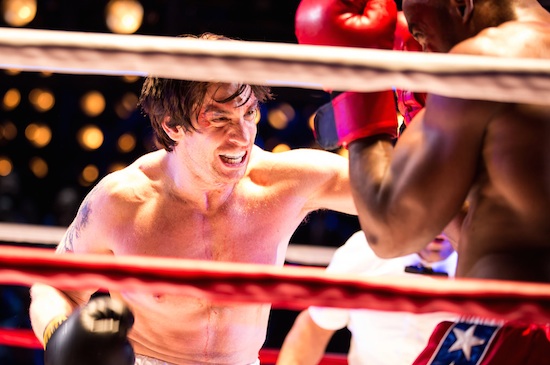 Here’s a video of highlights…

One last random note… Rocky plays the Winter Garden Theatre. I found it amusing, perhaps inappropriately so, that more than once the boxing ring lifted off the stage to allow boxers to fight above the rest of the action. Sometimes the ring would lift all the way up into the theatre’s fly space. It reminded me of a certain tire that used to lift cats up into the Heavyside Layer in the longest running show that’s ever played at the Winter Garden.