Will and I attended the inaugural Rainbow Con in Tampa over Easter weekend (April 17-20). It was a great time mixing with a bunch of authors and readers. We caught up with some great friends and made some new ones too.

The thing that first attracted me to Rainbow Con was the tremendous diversity in the panel discussions–everything from three panels dealing with the Young Adult genre, to looking at trans and gender queer characters to writing lesbian fiction to religion and all kinds of things in between. There were dozens of panels and times where I couldn’t be everywhere I wanted to be. For the most part, the panels I went to were very informative, and usually entertaining as well.

The religion panel, which initially I went to because my friend Wade Kelly was on it, turned into a wonderfully insightful discussion on how religion is portrayed in LGBT fiction. The panel, which was hosted by David Berger, also included Angel Martinez, Cari Z, and Sui Lynn. In particular I liked how they all wanted to avoid the stereotype of the evil character from the religious right. They wanted to see religion portrayed, both good and bad, in fully rounded characters who had motivation behind what they were doing. It was a fascinating way to start off Easter Sunday morning.

Two of the YA panels I liked a lot also. One dealt specifically with the challenges of presenting sexual content in YA. It’s something teens are aware of, but there’s the need to balance it in terms of what the parents want their children to read and what libraries will stock. Another panel dealt with the genre in a more general way, and the importance of continuing to write in the genre and to present a broad array of characters so the audience can see themselves.

Geoff Knight, one of our closest friends, was the guest of honor for the conference. His reading and Q&A session was excellent, especially since he read from two books I haven’t read. In particular, his read from The Boy From Brighton, was so very good and nearly made me cry a couple times. I’ve already bought and added that to my Kindle.

Speaking of adding to the Kindle. Stephen Del Mar was on several panels and he mentioned his story called “Slay Me,” said the Dragon. He did a reading from that and it was hysterically funny–dragons hiding in human form… and a dragon falling in love with a slayer! I had to buy that too based on his reading.

This was the first con that I attended as an author. The coolest part of that experience was getting to read from Hat Trick. Since Will shot video, I can share the reading with everyone.

The reading was amazing… even more so was the support I got afterwards. Geoff Knight put this out on his Facebook feed: 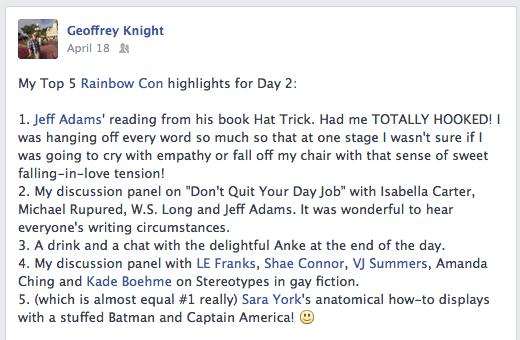 He also called out the reading as “fucking brilliant” during his own reading/Q&A session the next day. I’m truly honored to get such high remarks from him. I also appreciate that Becky Condit, W.S. Long and Sally Bosco all came to the reading and had good things to say afterwards!

I also did a couple panel discussions. The plotters vs. pansers one was a lot of fun. I always like hearing other people’s processes and this was a lively discussion between the panelists and the audience (which had a lot of writers in it). The panelists shown below are K. Piet, S.L. Armstrong, Cody Stanford, David Berger, Lexi Ander, me, and Geoff Knight.

I also hosted one about how writer’s balance their day job and writing. This one was also interesting in terms of how people found their balance and got their job done while also doing everything involved in writing (not just writing words, but also editing, marketing and so on). The panelists shown below are me, Michael Rupured, Isabella Carter, Geoff Knight and W.S. Long.

Besides catching up with Geoff and Wade, I also got to meet Sally and Spencer in person (yay!) and spend time with Michael and Anthony (who I’d met at GRL, but really got to know this time) and meet cool new people like Stephen, David and Beau to name a few. Sadly, even with four days, I didn’t spend time with everyone I wanted to. I saw Susan and Becky for only a few minutes here and there. And, despite the idea of setting up dinner with the duo who are Kindle Alexander, that didn’t quite come to fruition. I’m sure there are people that I should’ve met that I didn’t too.

Already looking forward to doing it all over again at GRL in October!

You can see all of our Rainbow Con photos over on Flickr.