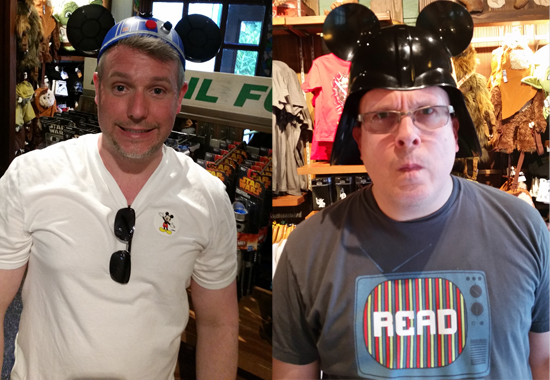 After Rainbow Con we traveled an hour East and had a couple days of magic in Orlando! As you can see above, we couldn’t resist the Star Wars version of Mickey ears.

We stayed at Disney’s Port Orleans Riverside resort, which was quite pleasant and offered up some good food, which was breakfast and dinner a couple times.

We spent a day at Universal Studios/Islands of Adventure because I wanted to see the Wizarding World of Harry Potter and Will and I both wanted to see The Simpsons stuff. The Harry Potter ride was awesome (except for the scary spiders part). All of the Potter stuff was fun, especially the Butterbeer which I loved!

Universal seems to be the king of the 3D movie ride. We both enjoyed Spiderman, Despicable Me, Transformers, Krustyland (which was a great retooling of Back to the Future). Disaster! was a cool expansion of Earthquake! (with Christopher Walken no less). We also revisited the classic magic of E.T. We were less impressed with Shrek 4D. The movie was good, the “ride” experience was less though.

Over at Disney, we had two primary goals–have a meal at Be Our Guest (which is Beast’s Castle) and to ride Expedition Everest.

We scored major with Be Our Guest because somehow we ended up in a test group to get a lunch reservation on Fast Pass+. So, rather than wait forever in a line to get in to eat, we had an arrival time. This was spectacular and worth the entire park admission price for me. The castle is gorgeous. The ordering experience via a combination of touch screen and the Magic Band was cool. And, best of all, the food was good. They really pour on the magic here. I felt like I was in the movie… and I freely admit I wept a couple times because it was all so perfect, including snow falling outside the ballroom.

We rode the new Little Mermaid ride, which was cool. We did classics with Haunted Mansion, Winnie the Pooh, Tiki Room, Country Bear Jamboree and Pirates of the Caribbean too.

Over at Animal Kingdom we made our way to Everest… where I chickened out. I saw this drop…

… and I bailed. He rode it and reported that he liked it, but he wanted to see more Yeti!

Overall it was a tremendous couple of theme park days. Universal was great because you could actually spend some additional cash and get priority access to everything we wanted, except Harry Potter. Disney you can only get priority for three things per day, so we ended up riding less (I wish Disney would go the Universal route because we would’ve paid for the access since we were only there a day).

You can see all of our theme park adventures over in the Flickr album.