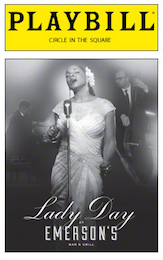 It was a pleasant surprise when it was announced that Audra McDonald was coming back to Broadway this spring. It’s been two years since she was last on stage here for The Gershwins’ Porgy & Bess. This time out she’s in a play with music as she portrays Billie Holliday near the end of her life in Lady Day at Emerson’s Bar & Grill.

Holliday played at Emerson’s in March 1959, just four months before she died on July 17, 1959 of cirrhosis and hear failure. The play unfolds during a late night performance where she not only sings, but reflects on her life and how she ended up where she was.

McDonald is incredible channeling Lady Day. It reminds me of the stellar performance Tracie Bennett gave as Judy Garland in End of the Rainbow. McDonald alters her own beautiful voice so she sounds like Holliday and it works magnificently well. There are fifteen songs in the show, including classics like “God Bless the Child,” “Strange Fruit,” and “T’ain’t Nobody’s Business if I Do.” 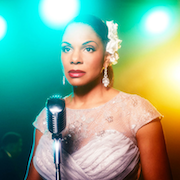 I don’t think there is a better spot on Broadway for this show than Circle in the Square either. With the thrust stage and horseshoe arrangement for most of the seats, the designers have recreated Emerson’s by arranging twenty tables on stage so that up to eighty people become part of the performance (these seats cost around $300 and we did not spring for those). McDonald interacts with some of these people as she comes out into the audience to talk, and to get more drinks from the onstage bar. It’s a great atmospheric element to have the setting be a realistic looking club.

While I am familiar with Holliday’s music, my only exposure to her life is Diana Ross’ turn in the 1972 movie Lady Sings the Blues. That certainly told the story of her tragic life, but this show tells the story on a more intimate scale as Holliday discuss her prison time, her exile from the New York City cabaret scene, the loss of her mother and her tumultuous love life. It’s amazing how much is covered in ninety minutes, but the story and the songs mix together perfectly. 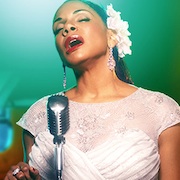 I suspect when the Tony Award nominations are announced in early May, McDonald will find herself nominated for this outstanding performance. Having seen her take on a number of roles, this one is quite an achievement as she takes on someone as iconic as Bille Holliday.

The show officially opens April 13 and continues its limited engagement until June 1. If you’re a fan of McDonald’s or Holliday’s you should catch this show.

Unfortunately, there’s no performance video currently available. Keep an eye on the show’s official website as the opening draws closer as they will likely post video.