I’m disappointed with myself that I missed Ned Vizzini’s books when they first came out–Be More Chill in 2004 and It’s A Funny Kind of Story in 2006. To be honest, I hadn’t heard of Vizzini until he took his own life in December of last year. Word of his death was in my Facebook newsfeed from several authors I followed, and I read a post on Bill Konigsberg’s blog as well. Not only had I missed his books (there are two others on my to-read list), he also worked on Teen Wolf, a show I’ve enjoyed since it started in 2011.

I’m glad I’ve finally read some of his work as they are incredible. 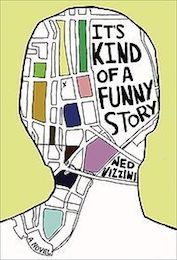 Of the two books I read, It’s a Funny Kind of Story was published second, but it’s what I read first since I’d heard the most about it.

It’s the story of teenager Craig Gilner. He pushes himself, and pushes hard, to get into an elite New York City high school only to find himself completely overwhelmed once he gets in. Depression sets in, he can’t eat, can’t sleep and ends up checking himself in to a mental ward rather than jump off the Brooklyn Bridge.

This book blew me away. Craig is the narrator and reading the detail his experiences as panic sets in, how it feels when his body rebels against eating or the angst of a sleepless night is incredible. Equally impressive to read is how Craig starts to get better once he’s in the hospital. He sets a number of interesting people and sees some of himself in them and in others sees that he doesn’t have it quite so bad. He also sees what he must do to change how he responds to the world.

While the book was written eight years ago, it’s message is still relevant–not just to teens by adults too. So many pile pressures on themselves that can make them ill. Vizzini captured that so amazingly well with Craig. It was amazing to read, through the humor, drama and sadness. 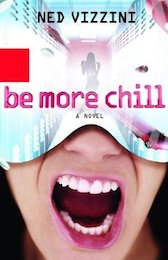 Be More Chill has a completely different tone than It’s Kind of a Funny Story.

Jeremy Heere is desperate to be cool and to get a girl. He’s got his eye on Christine, who is starring in the school play with him. But he can’t hardly speak to her without screwing up. He knows he’s got problems in the cool department–he keeps a log of each day’s humiliations.

He finds out about, and acquires, a microcomputer that embeds into his brain and starts talking to him, in a Keanu Reeves voice, with directions on how to be cool, also known as being more chill. He’s given real time instruction on how to dress, how to speak, who to speak to, how to navigate social situations and other important direction for getting in with the right crowd.

Vizzini draws a great character with Jeremy. He wants to be cool, but he wants it on his terms. He fights with his computer, called a squib, because he doesn’t want to cut his best friend out of his life despite the fact that Michael isn’t cool. He also doesn’t want the most desirable girls, he wants Christine.

Squibs are new technology though, and rather black market in the U.S., so you can imagine that not everything will go right with this. Therein lies my one issue with this book. It ends too soon and there’s not really a wrap up to how things turn out. It sort of works, but you’re also left feeling like it’s incomplete.