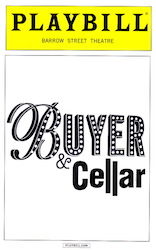 We’ve had Jonathan Tolins’ Buyer & Cellar on our radar since last summer. We enjoy Tolins’ work on stage and TV. We love Michael Urie. And yet it wasn’t until yesterday afternoon that we finally got to the theatre.

Up front, you find out that the events in the show aren’t real. However, they are rooted in a could be reality. In 2010, Barbra Streisand released the book My Passion for Design. Among the things she discussed was modeling her basement, which was full of treasures, into mini shops. That way things weren’t stored, they were displayed (you can see pictures of this from a Bazaar photo shoot). The play goes with the premise that someone must work in this mall to assist its one customer. 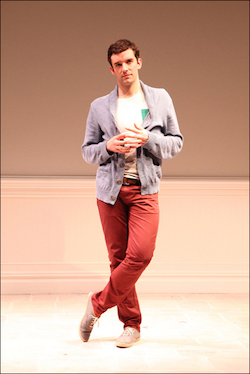 Urie is incredible in this show. He plays Alex More, the out-of-work actor who ends up working in the mall. He’s also all the other characters: Alex’s boyfriend, Barry; Sharon, manager of Streisand’s house; and Barbra herself. He moves effortlessly between the characters, with shifts in voice and body language, but its done in a way that’s not jarring, even when he’s having conversations between two people. It’s no surprise why he picked up a number of awards and nominations for this role. I’m glad we saw Urie before he leaves the New York production to take the show to Chicago (starting at the end of April) and then Los Angeles (in July).

Tolins crafted a wonderful script, which takes what the public knows of Streisand, especially her perfectionist streak, and combines it with how you think she might be in her own home. Sometimes portrayals of the secondary characters teeter close to caricature, but between the deft script and Urie’s portrayal the 100 minutes leave you thinking this could’ve all actually happened.

Below is a video that captures the start of the show as the audience finds out about the book, and then gives a bit from Alex’s first encounter with Streisand in the doll shop. In just these two and a half minutes, you’ll see why this show is such a treat.