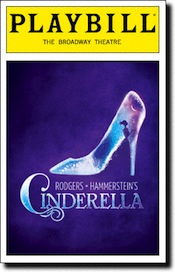 Though it open nearly a year ago, I finally got around to seeing Rogers & Hammerstein’s Cinderella yesterday afternoon. I wanted to be sure and see it before replacements take over for the primary leads next month. Since we all know the story, I won’t bore you with a plot recap and just get to what I thought of this production.

This is the first time R & H’s Cinderella has played on Broadway. Originally written for television, there have been 3 separate productions (usually referred to as the Julie Andrews version, the Leslie Ann Warren version and the Brandy/Whitney Huston version). Each time, the script (or “book” as it’s called in musical theatre terms) was reworked. It’s really hard to make a story that everyone is familiar with seem interesting and fresh. It also doesn’t help that you have a passive heroine who simply waits for good things to happen to her.

Douglas Carter Bean deserves a ton of credit for successfully reworking the book. He’s kept all the necessary prerequisites (a pumpkin coach, a royal ball, trying on the glass slipper) and combined them with new story elements to make this Cinderella a funny and heart-felt show for a whole new generation.

In the Act 1 finale, as Cinderella flees the ball, she losses her glass slipper… but goes back and picks it up!

That poor prince has got his work cut out for him.

In this version there is no King or Queen. Prince Topher is a young man trying to find a balance between normal princely pursuits (like slaying giants) and being a compassionate ruler. Cinderella, despite her difficult home life, is intent on making the world a better place. She doesn’t want to go to the ball just to meet the prince, she wants to go so she can talk to him about the struggling lower-class citizens of his kingdom.

A special shout-out to the design team for a beautifully opulent production, especially costume designer William Ivey Long, who somehow transforms scullery-maid rags into a coture ballgown before your very eyes.

Laura Osnes is ridiculously gorgeous and talented. She makes a perfectly earnest and charming Cinderella. The always hilarious Harriet Harris is a superb evil step-mother. Ann Harada and Marla Mindelle make wickedly funny stepsisters. In this production, their characters get to do more than the standard stepsister shtick, they’re actually integral to the plot! Thanks again Douglas Carter Bean!

I really enjoyed this production. In fact, I think I enjoyed it more than any of the previous televised versions (I know, sacrilege. But what can you do?).

Proving that Broadway folk have wacky sense of humor, here’s a video written and directed by Prince Charming himself, Santino Fontana.