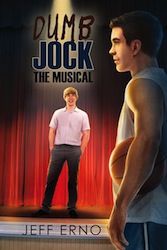 I don’t usually jump to book four in a series, but since this had “the musical” as part of its title I did. It was an okay choice too as it didn’t seem like I was missing any key information as I got started with Jeff Erno’s Dumb Jock: The Musical.

I’ll say right off that I loved this book, so much so that I finished it in about two days.

The story centers on Evan, a star basketball player and drama club member, and Noah, also a drama club member and writer of the school’s new musical. Evan knows he’s probably gay because he’s got an attraction to guys that he can’t shake. Noah is out at school, and deals with the occasional bullying. The musical he’s written is based on real-life events from the high school that happened a few decades back when a football player came out by declaring his love for another student.

Noah thinks Evan would be perfect as the “dumb jock” lead in the show. Evan’s not so sure, because it might force him to confront things about himself he’d rather not. The other thing Evan has to consider is his growing crush on Noah.

Evan and Noah have a ridiculously cute courtship. I suspect I had a grin across my face the entire time I read their scenes. Noah, while shy, knows what he wants and he’s willing to tell Evan to the point that sometimes Evan is embarrassed even though he’s supposed to be the tough jock.

Everything isn’t great with the basketball team, or with his best friend, Bryan, once the outing occurs. Religious forces in the town work feverishly to protect the children! There are powerfully allies for Evan and Noah too and the showdown at a city council meeting made me tear up.

On the side of the main conflict, Bryan has his own demons to battle as well and that winds up providing quite the emotional punch as well.

At the end of the book, I loved how Erno jumped forward to give us a peek at the future as well.

As I said up front, I loved the book. The characters were great. The writing style, easy to read and with enough twists to keep me interested. I picked up the third book in the series while I was at GRL this past weekend (and got it autographed, yay!). It looks like I’m going to read the series backwards, but I am going to read them all–and I suspect love each of them too.