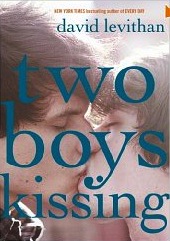 David Levithan keeps outdoing himself. Last year’s Every Day was extraordinary. His latest release, Two Boys Kissing, offers up a unique narrator for a YA story and has a great mix of characters that were engaging.

The narration comes from a chorus of gays who have passed away. This group speak with one voice as they watch over several young people. They give voice to the men who lived and died the early days of the AIDS epidemic. This chorus provides both a history lesson and a commentary on how much things have both changed and not changed since they were living.

The two boys kissing from the title are Craig and Harry, former boyfriends who are still friends, who decide to make a statement against hate crimes that happened against their friend by breaking the Guinness World Record for kissing. These 17-year-olds will have to kiss for more than 32 hours to keep their lip lock for more than 32 hours.

As the Craig and Harry kiss, the chorus is also watching three other sets of teen boys: Neil and Peter have been together for a year and think they have a solid relationship, even though one of them is only sort of out to his parents. Their journey during the 30 plus hours is a poignant look how a relationship can shift, change and  grow over time. Ryan and Avery are a potential new couple, having met at a gay prom just as the story begins. It’s a delight watching these two discover each other, how Avery deals with the angst of telling Ryan that he’s F2M trans. These two must also deal with some small town prejudice and how Ryan has dealt with that for far too long. Lastly, there’s Cooper, who lives cutoff from the real world as he spends increasing amounts of time surfing websites chatting with other men looking for a connection. Unable to connect with anyone, he’s the most desperate of these characters as he looks for someone to care about him.

The book is thought provoking and moving from beginning to end. The chorus narrator provides interesting context and history for the modern boys. Meanwhile, each of the boys has their own moments in the storytelling spotlight as we learn about what thrills and scares them about what’s happening in their own relationships and the world around them. More than once reading this I laughed out loud as well as shed some tears. It’s yet another extraordinary work in Levithan’s increasingly amazing collection of books.