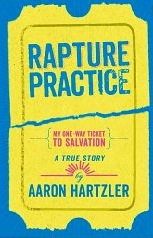 Rapture Practice by Aaron Hartzler is the first YA biography I’ve read and it was wonderful.

The book mostly focuses on Hartzler’s high school years. We find out on the very first page how religious his family is–they believe that Jesus is coming back and that the rapture will happen, that it could be anytime and you have to live your life so you’ll be among the ones who will float into the air to meet him.

His father is a pastor, scholar and loving father. Mom is a stay at home mom who teaches Bible class, including one called the Good News Club. Together they work to raise three God fearing and God loving children.

As the story opens, young Hartzler is a believer in what his parents tell him. He joyously participates in spreading the gospel with his parents and leading the life they want him to lead. As he works his way thought high school however, he discovers non-Christian music, going to movies, and seeing how parents who don’t believe exactly the same as his parents treat their kids. As a result, he starts to branch out in ways his parents do not approve of. He also makes the slow discovery that he’s more into boys than girls.

This is such a critical story to tell as it deals not only with his evolving sense of self, but his evolving relationship with God. His parents have an interesting story too as they struggle to deal with the changes in their son, especially his attempts at lying and deception and how that affects their relationship. In this time where their are so many questions around faith and how have a relationship with God while being gay, I found this to be a compelling read. I hope Hartzler does a sequel so we can continue to see how his relationships continued to evolve.