Cycle for the Cause 2013: Difficult Ride Yields Amazing Inspiration

Cycle for the Cause 2013 ended around 2pm yesterday as the riders came home to The Lesbian, Gay, Bisexual & Transgender Community Center after a 275 mile ride down from Boston. I’m thrilled to report that The Center raised a historic amount of money for this ride, with $606,091 (that’s more than $130,000 higher than last year). That number will creep up even more in the coming days while fund raising remains open–please donate if you haven’t already by clicking here.

I’m proud of my own fund raising for this year, which topped out at $4,215. That’s my highest amount raised for the ride, which brings my four year total to more than $15,500. I can’t give enough thanks to the friends, colleagues and a couple of strangers who helped me achieve this. 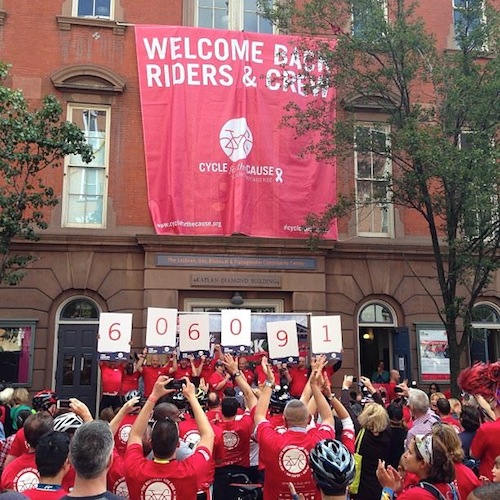 The ride is always three days that are unlike any other. This year, day two was particularly difficult for me and yet day two also turned into the most inspiring to me of perhaps any of the rides I’ve done.

I was asked, and happily accepted, being caboose for the entire ride again this year. For those who don’t know, that means I was the designated last rider. That means I’m a marker for the ride crew to know where the end of the ride is, and I’m also support for the rider(s) who are at the end of the ride. I don’t ride all the miles of the 275 when I caboose because I hop on and off the course, to make sure I stay close to the last rider. This is how my mileage broke down this year: Day 1 approx. 75 miles of 112, Day 2 61.5 miles of 84, Day 3 – 46 miles of 64 for a total of approx. 183 miles of 275.

I meet some great people at the back of the ride, and this year was no exception. I want to share the stories of four people that I talked about at dinner Saturday night (and the last one is significantly expanded from that dinner):

> There was a guy (whose name I still don’t know, which is bad of me) who I bonded as we discussed the ramifications riding a bike with our 225-pound plus bodies. I met him as I was shuttling from a rest stop out to find the last rider. Later, in the day I came up on a sweep van that was putting two people in, but also dropping him off. It turns out, he got out of the van to make space for his wife. He told me later that she was not one to give up on anything, so if she’d called for the van she needed it. So he and I rode along together for a while. This is proof that chivalry is not dead.

> Maria from team Goldman Sachs was amazing. She was at or near the back of the ride consistently because she’d not been able to train properly. Her knees were bothering her a lot, but she kept going and going and going. She only got a van when she knew it was the way to go to ensure she’d be able to ride the next day. We had a great chat as we waited for a van to come get her towards the end of day 2. I’m happy to report that she succeeded in riding all of Day 3.

> Dan from Team Eagle also kept on riding as much as he could. One Day 1 he nick named me the grim reaper since I was the sign that he was at the rear of the pack. He rode a lot, and really pushed himself hard to keep going. However, when it was time for him to be done and call a van, he’d do his best to find a spot along the rode where the van could get fully, safely off the street.

> Billy, also from Team Eagle, is the guy who really, for me, captured the spirit of the ride this year. I saw Billy at rest stops on Day 1, but as we got into lunch on day 2 he was the guy I was riding behind. He was in pain, with one knee wrapped. The hills really took their toll. He wouldn’t allow himself to be swept. Despite the fact we came into rest stops as they were closing, he’d get a quick bite of food, hit the porta-john, refill his water bottle and take off. There was a particularly nasty 17 miles stretch of road towards the end of day 2. I dropped in behind him with about 14 miles to go, it was beautiful country but hilly beyond belief. He’d grunt and make his way up the hills and we’d try to talk, laugh and ignore how arduous all this was. Romaine  (one half of the Derek and Romaine show on Sirius’ OutQ channel) was in the sweep van parked at the top of a hill, Billy rode by as she cheered on. I stopped and told her I was loosing it… my brain had had enough and my body felt like it was about to rebel (which, looking back, I think was my brain trying to trick my body). As I said that though I realized that Billy was out there pushing through and that I should too… I needed to be out there supporting him and what he was doing. Romaine gave me a good pep talk that supported that and I took off. Billy got through those 17 miles and I got through them largely because of him and his inspiring determination. Romaine kept track of us, stopping at the top of each hill to cheer us on. At the last rest stop of Day 2, 6 hilly miles from the hotel, we picked up another member of Team Eagle, I think his name is David, and we tackled those last 6 together. The crowd that welcomed us at the hotel snapped this picture under the day’s finish sign (that’s Billy on the left, David in the middle and me on the left). 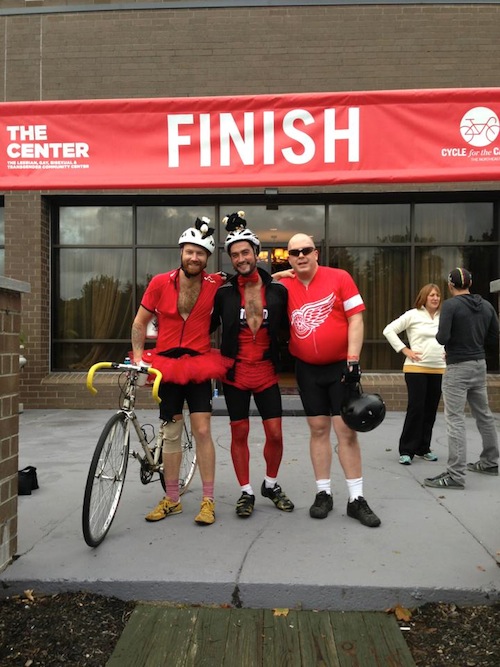 Billy went into Day 3 with both knees wrapped, but feeling good otherwise. If I saw him at all on the road at all, he was at the very end of my line of sight. We’d check in with each other at rest stops, and we kept moving. As we were wrapping up after lunch, I asked if he’d ride out with me. I’d done the 14 miles before lunch solo because I couldn’t get dropped into the course since we were on greenway. I wasn’t thrilled with the idea of doing another 17 solo. We took off, and we zipped through the greenway leading into Westchester (for several miles we were going between 17mph and 20mph). We came off the greenway to do the last hills for the day and came to a stop at a signal light. Here, Billy’s back tire popped. He looked at the tire while I called command to get them to send the bike mechanic back, who’d we’d just seen maybe five minutes previous. As Billy’s checking the tire though, we see the puncture is through the tire as well. The mechanics carry tubes, but not tires.

I did the only thing I could at that point: I gave Billy my bike.

I assured him this was okay. That I would call command and take care of everything and that no one would get in trouble for the swap. Getting him to the finish line was what mattered. He took off. A command car showed up right after he left in response to the call I’d already made looking for the mechanic. I went to the Center in the car and got there in time to welcome the riders back. I don’t have the words to explain how elated I was when Billy crossed the finish line with the rest of the riders! (That’s him, second from left, with the fist pump, as he rode in to the Center.) (This ended up as part of the ride’s coverage in The Midtown Gazette.)

Day 2 is Red Dress Day so that the riders make a red ribbon on the road way. There were some great costumes this year

Team Aqua won the best team award for their bellydancing outfits. And yes, they were out on the road in most of these costume pieces–as much as they could be and still be safe 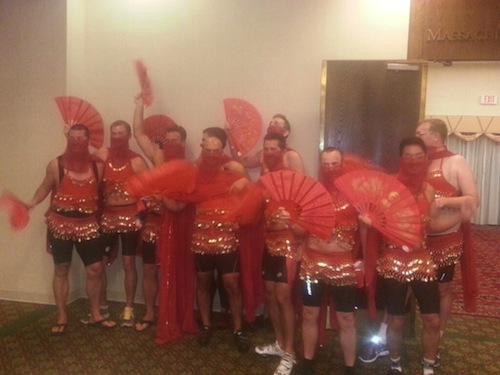 Romanie, who was driving the Superhero Sweep Van, was Superman (the red cape was good for Red Dress Day) and Rob, who was a co-winner of the best dressed crew, was Little Red Riding Hood. 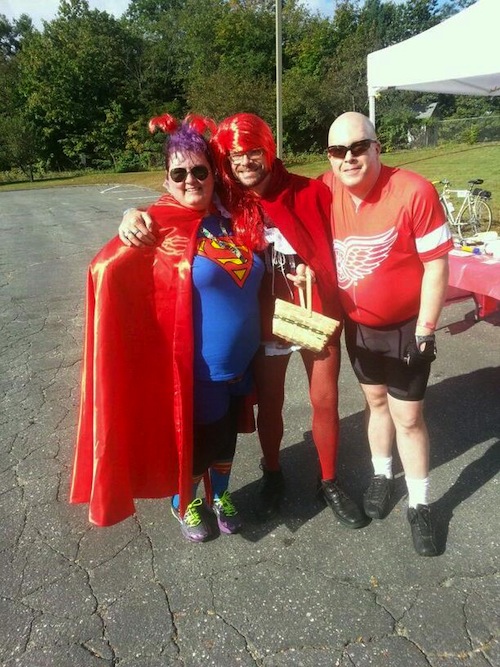 It was great to have Steve back as ride coordinator! He always looks fabulous on Red Dress Day. 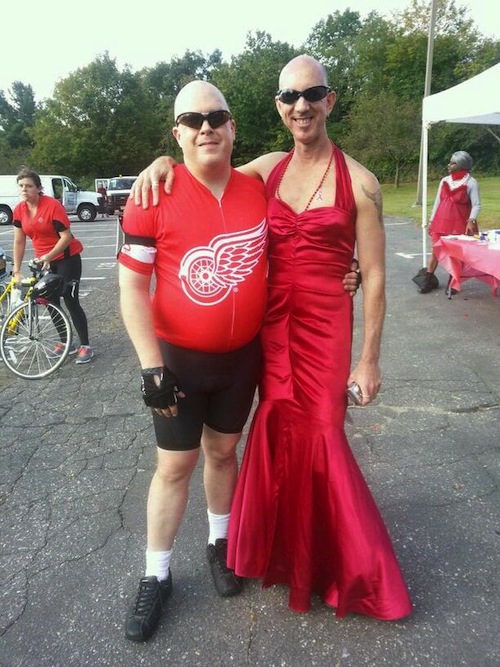 Major Shout Out to My Superhero!

As I mentioned, Romaine drove the superhero sweep van. Day 1 she was Robin, Day 2 she was Superman and Day 3 she was Batman (somehow I don’t have a picture with her as Batman). She was incredible as the sweep van that was primarily responsible for the back of the ride. She supported me, and all the riders at the back of pack, so perfectly. She’d loop around to make sure we got up every hill and know that we were being watched over and that she was ready to help. Thank you, Romaine, for everything you did! You are the definition of a super hero! 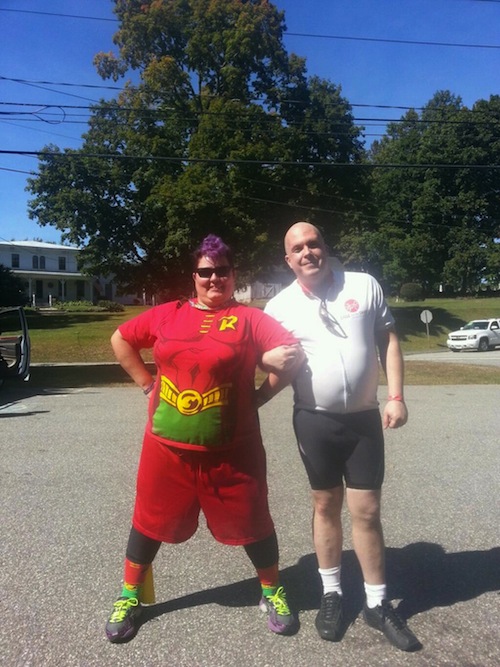 The ride was difficult in another way because I couldn’t discuss it with my mom. She was a big supporter of me riding and was usually my biggest single donator. She’d follow the ride on Twitter, looking at pictures and keeping track of what was happening. We’d also talk at the end of each day so she could get more details. I thought of her a lot over the three days. I have no doubt she was watching over me, but I definitely missed being able to talk to her about the adventure.