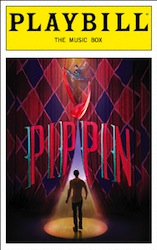 The revival of Pippin has been on the to-see list for months. We did it today, even buying full price tickets (which we rarely do), because we wanted to see the production before Andrea Martin departs later this month. I’m happy we finally took the plunge to see this incredible work. Everything about it is extraordinary, making it one of the best things I’ve ever seen on a stage.

I’ve only seen Pippin on stage via the Ben Vereen version that was recorded for television (and doesn’t fully represent the Broadway version). I remember the Fosse choreography, Vereen’s outstanding performance and songs like “Magic To Do,” “Corner of the Sky” and “Simple Joys.”

Director Diane Paulus, who won a Tony for her direction here, has done an outstanding job of reimagining Pippin into a big top spectacle. It retains Fosse-style choreography (including his original choreography for the “Manson Trio” number) and add a huge dose of circus acrobatics. 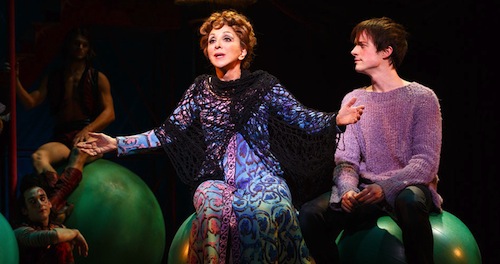 While the entire cast is sublime. Andrea Martin goes above and beyond as Pippin’s grandmother Berthe. She steals the show with her first act number “No Time at All,” which starts on the balls you see above. By the time she’s done though she’s swinging on a trapeze and singing upside down. It would be amazing for any performer, but consider that Martin is in her mid-60s and it’s unbelievable. 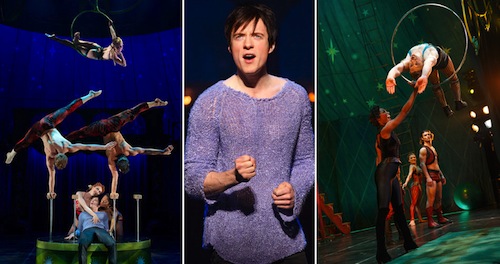 Matthew James Thomas was perfect as Pippin, moving from a young man looking for something meaningful to do in life to finding what it is he should be doing. Particularly great was when he stopped being awkward and cut lose with the Leading Player in some Fosse moves. Speaking of the Leading Player, Patina Miller is wonderful as she takes a role that was crafted for Vereen and makes it her own (though some of it seems to be merely playing Vereen, but amped up). She’s a great master of ceremonies, presiding over the show with humor, pizzaz, and sometimes a bit of foreboding.

Charlotte d’Amboise as Pippin’s stepmother was hysterical, especially in her big number “Spreading a Little Sunshine.” Christopher Sieber (one of my very favorite stage actors) was filling in for a vacationing Terrance Mann and he was spot on as Pippin’s father and king of the land. For his first performance he looked very comfortable in the complex show.

The rest of the performers were perfect in everyway, playing a number of roles and often doing double duty dancing and doing eye popping acrobatics.

Here’s a sample of what goes on at the Music Box Theatre eight times a week.

Get yourself to Pippin as soon as you can. It’s a exceptional way to spend a couple hours.