And now there’s a top 10 for season 10! So You Think You Can Dance locked in the top 10 for the season as Malece and Alan were eliminated this week. For the guys we now have Nico, Tucker, Paul, Fik-shun and Aaron while the girls have Jasmine, Amy, Makenzie, Jenna and Hayley. It’s a great lineup and the eliminations are going to be even more difficult going forward because I like all these dancers.

Sadly this week’s show opened with another group number disappointment. It was bad, it was just lackluster. The show hasn’t done spectacular Bollywood in a while. This week’s dance, choreographed by Nakul Dev Mahajan, was just standard from his repertoire rather than something special.

This week it was tough to declare a top three because there were so many performances that I loved, but I’m sticking with three.

Jenna with All Star Alex Paso Doble choreographed by Jean Marc Genereux: Tucker ended up with an infection in his knee and had to sit out this week (luckily he avoided elimination). Alex Wong stepped in and, with Jenna, performed a stunning pirate-themed paso doble. I loved every minute of this sexy, powerful, trick laden dance. 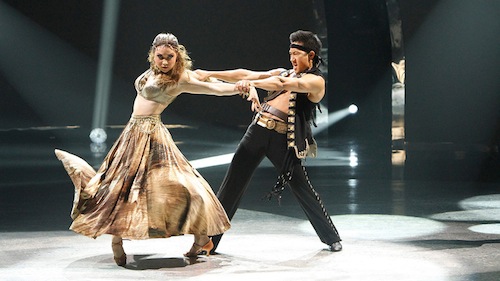 Aaron & Jasmine Hip Hop choreographed by Tabitha and Napoleon Dumo: These two nailed it with stunning musicality and swag. It was sexy and fun watching them move through this wild west themed dance. I’m sad their partnership ended this week (next week, the all stars will be partners), but it’s also going to be interesting to see what’s next for them. 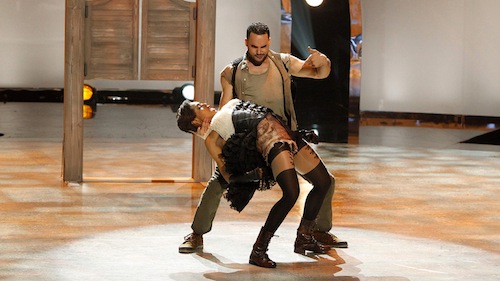 Fik-Shun & Amy Viennese Waltz choreographed by Jean Marc Genereux: I’m stunned week after week by Fik-Shun. I don’t know how he manages to do the lifts and tricks he does since he’s such a small guy, but he impresses and very much did so this week. This may not have been completely technically correct, but it was beautiful and gave me everything that I want in a Viennese Waltz. 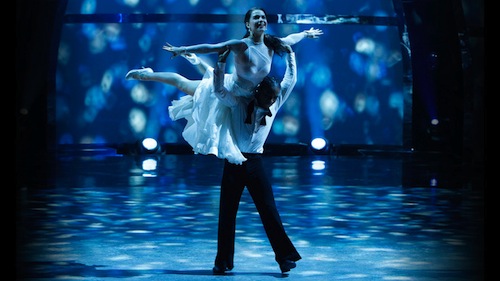 Here’s a look at the other performances in the order in which they occured:

Nico & Hayley Broadway choreographed by Sean Cheesman: One of the best Broadway numbers this show has ever done. These two danced to Chita Rivera’s “Kiss of the Spider Woman” and turned in a piece that was full of grit and passion–and two amazing lifts! I’m not completely sure it was “Broadway” style, but I loved it.

Alan & Malece Jazz choreographed by Mandy Moore: Technically this dance was fine, but the chemistry of old Hollywood the choreographer wanted was missing… and that completely killed this number for me.

Paul & Makenzie Contemporary choreographed by Mandy Moore: This was beautiful. Paul and Makenzie are another couple I’m sad to see end because they’ve worked so well together. This was a perfect finale for them as they got to show off their chemistry one last time, plus they got to do some complex musicality.

Aaron, Fik-shun, Paul, Aaron, Nico Hip Hop choreographed by Tabitha and Napoleon Dumo: NappyTabs delivered twice this week with a great power number for the guys that also seemed to be influenced by contemporary. I missed Tucker in this number because I do love to watch him move. However, Aaron let loose some tremendously sexy looks.

Jasmine, Amy, Makenzie, Jenna, Malece, Hayley Contemporary choreographed by Stacey Tookey. Stacey put together a gorgeous piece for these women. She had them doing lifts and other things you would normally associate with male partnering and it all came together into a beautiful performance.

And a special mention to… Amy Solo: Every now and then a solo comes along that has to be called out. Amy delivered a powerful, poignant piece that she nailed the difficult musicality on. It’s been a long time since I needed a tissue after a solo, but Amy made that happen.

Next week the competition amps up as the all stars start partnering with the competitors. It’s going to be exciting!