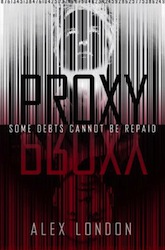 I discovered Proxy by Alex London because I went to the Openly YA tour, a book tour put together by four YA authors–two that I was familiar with and two that I wasn’t. I’m glad I found this sci-fi/thriller because it’s been a  while since I’ve enjoyed a genre book this much.

Proxy is set in a bleak future where everything is focused on keeping accounts balanced and debts in check. The rich have everything, and the poor are stuck in debt trying to pay it back. Syd, a 16 year old orphan, is drowning in debt in the worst part of the city. He’s working to pay back as a proxy to a wealthy patron while at the same time getting an education and trying to stay out of trouble. Unfortunately his patron, Knox, seems to live to be in trouble and that means Syd takes a lot of punishment on his behalf. When Knox ends up in a car crash, killing a girl, the punishment is more than Syd can take and he runs. In a shocking turn for Syd, the one ends up talking to for help to get away is Knox.

It’s impossible to say anything else about the plot without risking serious spoilers. London builds a tight story that twists and turns right up to the last page. I was constantly shocked by where the story went, which of course kept me turning the pages to see what would happen next.

I enjoyed the world London built. From a tone standpoint it seemed part Battlestar Galactica (the newer version), part Max Headroom with a dash of Mad Max. The naming of the orphans, like Syd, are great too–all coming from classic fiction. Syd is Sydney Carton from Tale of Two Cities. The guy Syd has a crush on is the very straight gamer Atticus Finch.

Without giving spoilers, I want to share two passages from the book that struck me.

The first is from Syd considering the system he lives in: “We all begin as equals, but a contract, like a confession, changes our relationship. One becomes a debtor, one becomes a creditor. One a proxy, the other a patron. The contract defines us until its terms are met. A goat would always be a goat, but humans can change how they define one another and how they define themselves. that was civilization.”

The other is a quote from Knox to Syd, which is something I think many people should consider for their own lives: “Laugh a little, Syd. Life is too short for perpetual misery.”

Proxy is one of the must read books of the summer for sci-fi/thriller fans. I look forward to more from London, either in this genre specifically or YA in general.