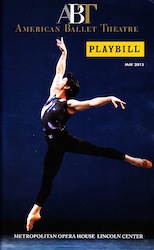 We made a return visit to Don Quixote yesterday afternoon. We first saw the comedic Don Quixote when we started going to the ABT Met seasons in 2011.

The story is a straight forward one. Don Quixote and Sancho Panza arrive in Sevilla. They meet Kitri, who is in love with poor barber Basilio. Kitri’s father, however, wants to marry her off to the rich Gamache. Don Quixote, however, things that Kitri might be is long lost Dulcinea. To get away from her father, Kitri and Basilio escape from Sevilla with the help of their friends, Espada and Mercedes. Don Quixote and Sancho Panza pursue the couple to a gypsy camp. It’s here Don Quixote realizes Kitri is not Dulcinea and that she belongs with Basilio. Kitri’s father and Gamache arrive at the camp and Don Quixote leads them astray. However, the rouse only lasts so long before the lovers are caught. Basilio fakes a suicide and that farce leads to a huge wedding between the lovers.

Here’s some video of Cory Stearns (as Basilio) and Paloma Herrera (as Kitri) in their pas de deux from Act I. This is not from yesterday’s performance at the Met, but it does show off the beautiful dancing.

Stearns and Herrera were in perfect form. Every move they made was so beautiful and their chemistry was so romantic. You can see the powerful partnership between them. Stearns continues to be one of my favorite ABT leading men. Stellea Abrera and Sascha Radetsky, as the lovers’ friends, were extraordinary as they did their Spanish-influenced choreography. The second act dream sequence where Don Quixote imagines Dulcinea was exquisite.

It was great to re-visit this production. I believe I enjoyed it even more this time.

Next week we get to see a premiere work from Ratmansky. We’re looking very forward to this after having seen an interview with Ratmansky recently on our local PBS station.