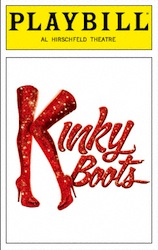 While I’ve never seen the 2005 film version of Kinky Boots, I’ve been interested in seeing the musical version since its got a book from Harvey Fierstein and a score from Cyndi Lauper. From the reviews that came out when the show opened on April 4, I knew the show was going to be good, but Kinky Boots far exceeded my expectations. Everything about it was spectacular and I think it’s going to be the new musical to beat this awards season.

The show follows Charlie Price, who has inherited his father’s shoe factory in a town outside of London. Charlie doesn’t want to run the factory, but can’t stand the idea of laying off the staff even though the once successful factory has fallen on hard times. When Charlie meets Lola, a drag queen, he discovers the trouble she has keeping her boots from breaking. The tall heel simply isn’t built to hold the weight of a man. Charlie gets the idea to introduce a line of Kinky Boots to meet the needs of an underserved market. Along the way, both Charlie and Lola learn about living up to their father’s expectations, embracing who you are and how to change the world one perception at a time. 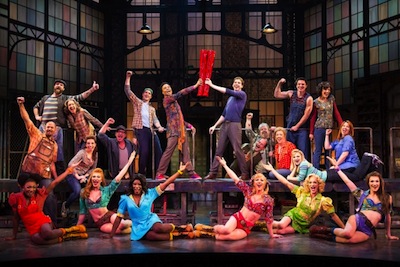 Fierstein crafted a solid book that intertwines Charlie trying to discover what he’s passionate about with the fate of the factory and its workers as well as Lola finding that there can be more in her life than just performing. It’s a heartwarming story as everyone learns something new about themselves.

The real story here is Lauper’s dazzling score as song after song is a stand out. “The Most Beautiful Thing,” which is all about the wonder of shoes, comes at the top of the show. “Sex is in the Heel” is an inspired songs about what makes those kinky boots so special. “The History of Wrong Guys” is a quirky song from Lauren, a factory worker who has a huge crush on Charile. “I’m Not My Father’s Son” is a moving number between Charlie and Lola as they reveal more about each other’s past. “What A Woman Wants” is a rollicking that points out the differences between what men think women want and what women really want. Act II closes strong with Charlie’s “The Soul of a Man,” Lola’s true star turn in “Hold Me In Your Heart” and the grand finale of “Raise You Up/Just Be.” I can’t wait for the cast recording to be released in May. 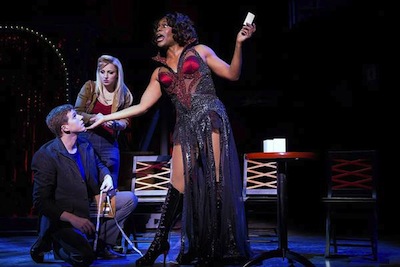 The company is lead by Stark Sands as Charlie and Billy Porter as Lola. These two are stunning. Sands plays Charlie as hard headed and a bit adrift in his life and watching his transformation into a man with passion was great. The show, however, truly belongs to Porter. Lola is fierce but vulnerable, which sounds like something you’ve seen before, but Porter’s portrayal is so nuanced that Lola is a fresh and powerful character. Two other standouts in the cast are Annaleigh Ashford as Lauren (Ashford’s comic timing is spot on as she works hard to get Charlie to notice her) and Daniel Stewart Sherman as Don (he’s a bigot that makes Lola’s life hell in the factory… but before it’s done he learns a lot).

I expect Kinky Boots to get a lot of awards this season and that I’ll be back to see it again sometime this summer. It was too much fun to only see once.