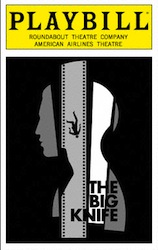 Our diverse season with the Roundabout Theatre Company, which also included The Mystery of Edwin Drood and Picnic, wrapped up yesterday afternoon with the revival of Clifford Odets’ The Big Knife.

This drama, set in 1948, focuses on Hollywood star Charlie Castle, a stage actor who became a major film star. Castle’s contract with the studio is up and he doesn’t want to re-sign. He wants to get away from Hollywood because he realizes its destroying him and his relationship with his wife and son. Unfortunately, there’s a cover up involving a hit and run that hangs over Charlie’s head that makes his withdrawal from the studio all the more difficult.

This show, revived on Broadway for the first time since its 1949 debut, is my first exposure to Odets. I loved the noir feel of the piece and the cadence of the dialogue. Sometimes the word choice seemed out of place–ten dollar words coming out of some of the characters mouth sometimes seemed wrong–but it also added to the feel of the piece and the rhythm of the speech. The drama that Charlie was involved in built at a good pace across the three acts and concluded with unexpected turns. 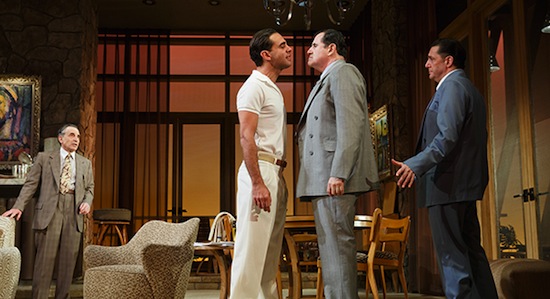 Bobby Cannavale was excellent as Castle. He goes from arguing with the studio bosses to having a tender moment with his estranged wife within seconds. It’s heartbreaking to watching him play out the character’s arc because his desire is to fix everything but the ability to do that is always just out of reach. Richard Kind, best known for his turn on TV’s Spin City and Mad About You, was unexpected as studio boss Marcus Hoff. I’ve never seen Kind play this blustery, argumentative, hard ass type of character before and it was a treat to watch him chew up his scenes. It was a delight to see Chip Zien, who I loved in musicals Into the Woods and Falsettos, in a dramatic turn as Castle’s agent. Marin Ireland was subtle as Castle’s wife. Watching her take on some of the men trying to control her husband was great. The others in the cast were also spot on in their roles in bringing this dark show to life.

The Big Knife is not the usual kind of show we see, but it was good to see a work from a classic American writer.

Next week we’ve got two shows coming up: the Second Stage revival of the excellent two-person musical The Last Five Years and the brand new Broadway musical Kinky Boots, which features a score by Cyndi Lauper and book by Harvey Fierstein.