You Can Play Night at Bridgeport Sound Tigers

Saturday, February 23 was a historic night as the American Hockey League’s Bridgeport Sound Tigers (an affiliate of the NY Islanders) became the first pro team to host a You Can Play night.

You Can Play is dedicated to ensuring equality, respect and safety for all athletes, without regard to sexual orientation. The mission is to guarantee that athletes are given a fair opportunity to compete, judged by other athletes and fans alike, only by what they contribute to the sport or their team’s success. Further You Can Play seeks to challenge the culture of locker rooms and spectator areas by focusing only on an athlete’s skills, work ethic and competitive spirit.

I’ve written about You Can Play a few times since it made it’s debut last March during an NBC NHL broadcast: “If You Can Play… You Can Play” and “Stereotyping Stereotypes” on this blog as well as “Alabama Says ‘You Can Play’ as it Builds a Hockey Powerhouse” at PuckBuddys.

I made the trip north to Bridgeport Saturday with a contingent of New York City Gay Hockey Association players and supporters. Plus. while I was there I met up with the guys who run PuckBuddys (they made the trip up from D.C.) as well as Vinny (PuckBuddy’s Islanders correspondent).

The event started off with YCP co-founder Patrick Burke participating in a panel discussion about the mission of the project. Here’s a excerpt from the beginning of the discussion:

The panel discussion was excellent and it was great to hear this sort of open dialogue about acceptance and fair treatment going on inside a sports arena (if I’m able to find links to the full discussion, I’ll add them in so check back occasionally).

Before the game started (and at least one other time during an intermission), the Sound Tigers played their own You Can Play video on the big screen. 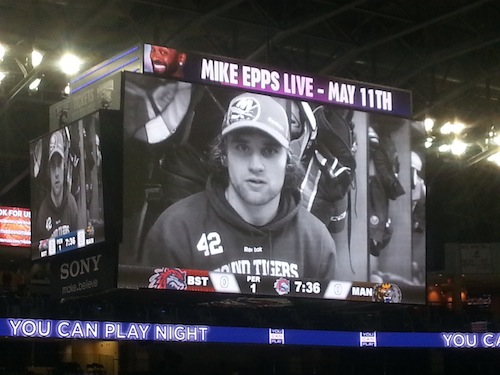 The game itself, against the L.A. Kings affiliated Manchester Monarchs, was a fun one to watch with a lot of well-played hockey. Unfortunately, the Sound Tigers couldn’t hold on to their early 2-0 lead as they ended up losing 3-2. I was surprised at the loss, although I didn’t see the entire third period, as the Sound Tigers had looked quite strong in the first two periods.

I missed the second half of the third because I had may own game to prepare for. After the Sound Tigers game, members and friends of the NYCGHA as well as people from the You Can Play project, including the people in the panel discussion video (Patrick Burke, Dave Farber, and Nick Kleidon) took to the ice for an exhibition scrimmage. 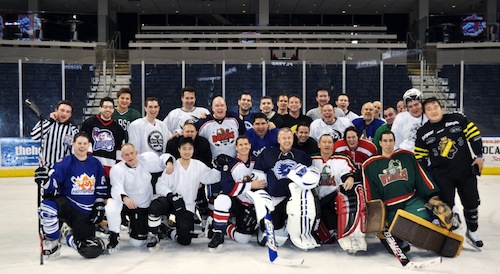 The hour long scrimmage was a blast. I don’t often get to play at rinks other than Chelsea Piers (in fact this was my first travel game since 2006’s Outgames trip to Montreal) and to play in a professional arena was a treat.

We were split up into a light team (which was named either the Penguins, as the scoreboard had it, or the Bears, as we called ourselves) and a dark team (the Flyers). I was on the light team and wore my Boxers jersey to represent one of the usual teams I play on. We had a great captain in Dave Farber, who plays in D2 at Chelsea Piers and has played hockey forever (as you can hear him discuss in the panel video above) and a solid team that ran the gambit from seasoned players like Dave on to new skaters. The other team was balanced like ours was so neither had the advantage.

I was paired on D with my Boxers teammate Kelly, which was great. Kelly and I have been a D pair with the Boxers on many occasions so we already knew how each other played. We were a solid D line, even against higher level players. I was particularly pleased to shut down both Burke and Kleidon a few times, sometimes on my own, sometimes with Kelly and sometimes with Dave). Boxers captain Alex, who played for the opposing team, commented afterwards that my game looked confident, which was great since I was occasionally freaking out inside when higher level players would come down the ice at me. Ultimately, the Penguins/Bears won 3-2 over the Flyers. 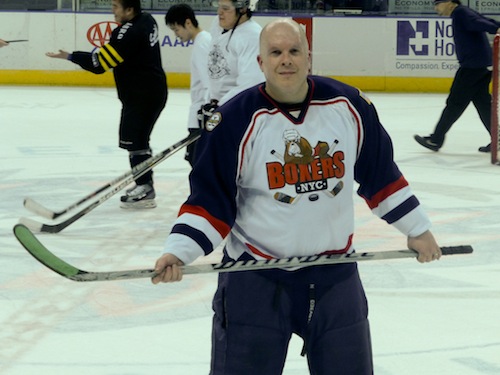 It was a great night, both as a spectator for the Sound Tigers and as a player on the Sound Tigers ice. Of course, it’s also awesome to see You Can Play continuing to extend the conversation about LGBT athletes and that the only thing that should matter in competition is their ability to play the game.

You can see my Flickr album of the event here. You can also check out Brian’s Flickr album as he was shooting a lot during the scrimmage.