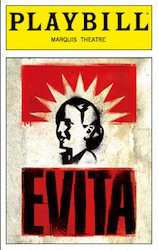 We almost waited too long to see the revival of Evita. Its been open since last spring, but its run ends next weekend when its star’s contracts come to an end. I’m glad we didn’t miss it because this production does a lot of things very well.

Evita is one of the  first Broadway shows I saw with a touring company. I saw it when it played Birmingham in the late 80s (1987, I think). My only other viewings of this show have been recorded–a production the Ferndale Rep did in the early 90s and, of course, the motion picture starring Madonna and Antonio Banderas. It was great to see a full-scale mounting of the show in a Broadway house.

What I loved most about this production was the choreography, which was rooted in Argentine tango. It was stunning seeing such powerful dancing to one of my favorite scores. The tango style is in practically every dance and it made a strong statement as it was used from the more subtle moments in “Waltz for Eva and Che” into the bigger numbers like “And the Money Kept Rolling In”

This production is the Broadway premiere of the staging that debuted in London in 2006 under the direction of Michael Grandage with choreography by Rob Ashford. The Broadway production also brought over Argentine actress Elena Roger  (the first Argentine actress to ever play Eva). Starring along side Roger for Broadway are Ricky Martin as narrator Che, Michael Cerveris as Juan and Max von Essen as Magaldi.

For me Elena Roger was simply okay as Eva. From an acting and dancing standpoint she was solid, but her singing was on the shrill side. I’ve known from hearing her on the cast recording and in TV appearances that her voice is not the usual  Eva voice (she doesn’t have a Patti LuPone-type by any stretch), but she seemed particularly off on the Tuesday evening I saw her. She was also occasionally hard to understand and if I didn’t know the lyrics to most of the songs already that would’ve been a problem.

Ricky Martin, back on Broadway for the first time since he was in Les Miserables in 1996, was great as Che. He got the character nuances right and his singing fit this score beautifully. He can also but out the tango moves great. I’m glad I saw him in this role. He should do Broadway more often. Michael Cerveris was outstanding. He captured Juan Peron so perfectly. Cerveris is always wonderful to watch (I’ll never forget his Sweeney Todd) and this was a great role for him. It made me wish that Juan had a bigger role in the musical so that he had more to do. Max von Essen was great as the smarmy Magaldi. “On this Night of a Thousand Stars” is usually a throw away number, be he played it so well.

The biggest clunker, and overall oddest scene, in the show was “Another Suitcase in Another Hall,” which is sung by Peron’s mistress when she’s been tossed out by Eva. Rachel Potter, as the mistress, sounded like she was performing in another show completely. Her vocal style was out of place.

Here are a couple previews of Evita. The first is a montage from the show. The second is Ricky Martin leading the company in “And The Money Kept Rolling In” from the 2012 Tony Awards telecast.