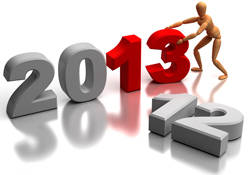 And off we go on another year.

Last year was a good one. I’ve got few qualms with 2012 as I did a lot of what I intended to do. The year was about living deliberately and I would say I was fairly good at that. I made choices about how to spend time to get what I wanted.

Could I have done better? Yes. There were more than a few times where I  made a choice that didn’t exactly further my goals. But, it’s not easy to get perfection.

As I was preparing to write this post, I came across something that resonated with me. On New Year’s Eve, the character A from David Levithan’s excellent book Every Day (one of my favorite books from 2012), took over the Twitter account of Random House Kids and talked about the concept of New Year’s Eve, making resolutions and spending time. While you can read the essay the Tweets form over at EW.com, it’s the final sentences that are the most powerful: “We say this year will be different. But we should think of this day, this hour, this minute. They all can be different. It is up to us.”

Completely true, though I suspect few of us consider life that way.

For me, 2013 will continue what I started in 2012–working to be deliberate in the choice of what I do with the 1,440 minutes in the day. I shouldn’t have a moment where I didn’t make a conscious choice about what I’m doing. It’s okay if I veg out in front of the TV as long as it’s what I want to do. There should be no second guessing or a thought of “I really should be doing x.”

In addition to being deliberate, I’m trying to be more present in each moment too, which means trying to multitask less. It’s not always possible because sometimes work requires that I’m watching over emails even outside of office hours, but I started making strides in this direction in the last half of 2012 and the effort will continue. One of the primary elements of this limiting my interaction with my phone. Example: if I’m walking on the sidewalk, or through aisles of the store I do my best not to pull it out and interact with it short of taking a quick glance if I need to know what time it is since it’s the only clock I carry. This will be a work in progress through 2013.

The goals for the year are pretty straight forward: have wonderful times with Will, excel at fundraising for Cycle for the Cause, keep being physically active in all its various forms to stay healthy, be great at my job, and write a lot (including getting Hat Trick out to publishers because this is the year for that, no excuses).