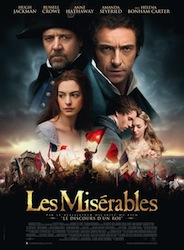 To borrow a lyric… I dreamed a dream where I loved this movie.

Sadly that dream did not come to pass, while this wasn’t a complete nightmare I do have some significant issues with how Les Miserables, one of my all time favorite musicals, made the transition from stage to screen.

My biggest complaint is with the direction and cinematography. Most of the movie is claustrophobic. I know director Tom Hopper, an Oscar winner for The King’s Speech, said he did the closeups to convey emotion. That might work on a limited scale, but the majority of the film is done with the camera basically inches from the actor’s face. It’s too close and unnecessary. Instead of a sweeping epic, the film felt constrained and I found myself wanting to see what was happening around the actors instead of being forced to stare at them.

Beyond the excessive closeups, there was something wrong in the pacing as well. I’ve seen Les Mis about a dozen times over the years–it was one of the first of the UK mega musicals I saw (I can’t remember if Les Mis or Evita came first, they happened within about six weeks of each other)–and it always seems to move it a good clip. Something about the movie made it seem strung out even though it was basically the same. Yes, there was a new song and there were some snips in some places and some additions in others, but it shouldn’t have affected the pace the way it did. It still clocked in at about two-and-a-half hours like the stage show does, but the film felt longer.

Another huge problem is Russell Crowe and his lack of a singing voice. Someone, I can’t remember who now, called him atonal. I thought that when I first heard the CD back on the Friday before Christmas and my opinion didn’t change seeing the movie. He acts the role of Javert fine, but his voice is just not up to the role of singing such powerful songs as “Stars” and his suicide soliloquy.

There were several things that I liked and made the movie worth the cost of admission (which is always an important thing):

I think it’s difficult to take a sing-through musical and bring it to film. Many  songs in these types of shows are designed as internal monologue and that’s more of a stage technique than a film one. Of the big British musicals of the late 80s to do end up on film so far, I think both The Phantom of the Opera and Evita did it better than Les Mis. Both Phantom and Evita have their own issues, but as a complete package they are more enjoyable. If Cameron Mankintosh takes the plunge to make Miss Siagon into a movie, hopefully he’ll learn a few things from the Les Mis experience.