It was a busy, but overall great year — and, hey, the world didn’t end so that made it all the better. Here’s my look back at 2012.

Let’s start off with highlights: 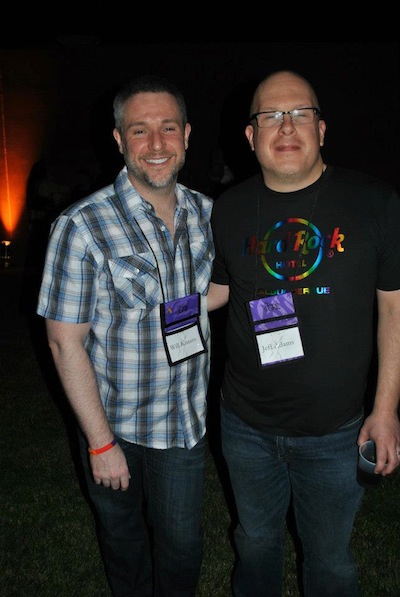 Travel & Writing Merge: Will and I got away from the city for a weekend in the desert to enjoy the GayRomLit Retreat. It was great to meet some of our favorite authors and catch up with some people we’ve met at book fairs in NYC. It was also the chance for us both to do some good networking and learn more about what publishers want. We’re already planning to go to the retreat next year when it’s in Atlanta. (Read more)

Writing was center stage for me a lot over the year as well. I did a lot of revision work on Hat Trick (which was previously titled Neutral Zone) and got some constructive and helpful feedback from some beta readers. I’m working on some fine tuning now and 2013 will be there it finally (for real) gets into the hands of a publisher and hopefully into print. I set aside work on the novel during November and, for the first time in a couple years, I used NaNoWriMo to create drafts of some new stories. I also did a good bit of writing for PuckBuddys, including expanding into some book and play reviews, as well as some for the Center blog.

Cycle for the Cause: It was an amazing Cycle for the Cause experience this year. I managed to get $4,000 raised, my highest total in the three years of doing the ride. Being the caboose for all three days was also an excellent time. The ride continues to be one of the things I look forward to doing most during the year. I’m not sure how it happened that I enjoy long-distance bike riding so much but it is something that’s become a part of me over the past couple years. I even did the NYC Century this year and got to see the city from some perspectives that I never had before. (Read more: Cycle for the Cause | NYC Century)

I’m already signed up for Cycle for the Cause 2013, and you can go here if you’d like to contribute now.

Gay Rights: This year was huge. President Obama declared that same-sex couples should be able to marry. And, for the first time, voters affirmed same-sex marriage in three states: Maine, Washington and Maryland. These states are the first time same-sex marriage has passed a popular vote. It’s great to see times changing like this. Also, as 2012 wound down, the Supreme Court said it would take up two cases related to same-sex marriage. One involves Prop 8 in California and the other the denial of Federal rights to same-sex couples who are legally married. These cases will be closely watched in 2013. 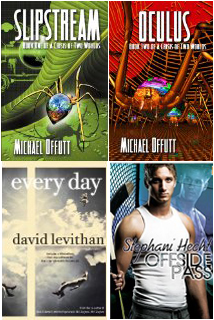 Books: My reading time has been cut a lot this year. My commutes are general done by bicycle these days, so I don’t read there. A lot of other time I’ve been focusing more on writing than reading. Of what I’ve read, however, there are some stellar standouts:

Theatre & Dance: It was a huge year in this category. I got to see three musicals that I’ve been wanting to see for years: Falesettos, Carrie (see some video of its opening number below) and Bare. None of them disappointed (although it did take me a little bit to get used to Bare in its new format). Some other highlights of the theatre year included seeing Darren Criss in How To Succeed in Business Without Really Trying, Newsies (see their performance at the 2012 Tonys below), the [title of show] gang back on  stage in Now. Here. This., Jim Parsons in Harvey, Tracie Bennett as Judy Garland in End of the Rainbow. On the dance side, American Ballet Theatre had a tremendous summer season at the Met. Among the wonderful things we saw there was the farewell performance of principal dancer Ethan Stiefel in Le Corsaire. I’ve been a fan of Stiefel’s for a while, but hadn’t seen him perform with ABT until his farewell so I am glad I was able to see that. We’ve already got our season tickets for ABT in 2013 and are looking forward to seeing eight performances.

Movies: It was a bleak year for movies, especially the summer season. We went to the movies less because there were fewer things that seemed worth the cost of admission. I enjoyed The Amazing Spider-Man and The Avengers. Skyfall was great. Life of Pi was visually incredible, but the story left me a little flat. Magic Mike was sexy fun. As I write this I’ve seen neither Les Miserables or Django Unchained, but I expect (and hope) that they would be among the best I’d seen in 2012.

Work: Work continues to be excellent. Joining Usablenet was a good thing. I enjoy my co-workers and I enjoy the job. I got promoted at the end of the year too, taking on the role of a project management team lead. So while I still work with clients, I also support a team of project managers to help ensure they are successful with their work.

Hockey: This was a mixed bag this year thanks to the NHL’s player lockout. It’s hard to feel sympathy for either side in this battle since some $3 billion was made in the 2011-12 season. I suspect the entire 2012-13 season will soon be cancelled and that will be the second season cancellation in a decade. The NHL has a lot to learn about how to keep its fans engaged. Meanwhile, my fandom for U of Alabama’s Frozen Tide hockey grew and I attended a series of games in January, which I will do again next month.

As for my playing, I curtailed a bit in 2012. With both ballet and cycling pulling my focus in the summer combined with enjoying the weekend evenings spent with Will over the ballet weeks, I decided to become an alternate on both teams for the fall/winter. I like feeling like I can pick and chose more the games I play and at the same time not feel like I’ve invested cash in games I made not ultimately be available to play. I did have a blast with the 2012 Chelsea Challenge playing with the Pittsburgh Tigers and bringing home a silver medal.

Let’s talk about a few lowlights of the year:

New York: The city, once again, had a ridiculous fall. In 2011 it was an earthquake and a hurricane. For 2012 it was a larger, more dangerous hurricane followed by a snowstorm. We were extremely lucky with the hurricane, especially when you consider that even now there are buildings just a couple blocks from us that are still damaged and uninhabitable. Hopefully 2013 will be calmer on the weather front because it’s been a nasty couple of years–especially the fall.

Politics: The 2012 presidential race was horrible. It was a painful year watching the Republicans bicker at each other and then Romney and Obama squaring off. The country as a whole needs to figure out how to work together instead of becoming more divisive. That divisiveness is in action here at the end of the year as the sides bicker over the fiscal cliff. It’s exhausting watching it play out and it makes you feel like the government isn’t working for the people at all, but merely trying to see which party can “win” any given argument.

Guns: So many horrible shootings this year, and yet this country clings to the idea that we have a right to own guns that serve no purpose other than to cause mass death. No private citizen needs an assault weapon of any kind. There is no good argument for it. We need the masses to stand up and insist that there are rules drawn around gun ownership.