Hurricane Sandy – All is Okay for Us 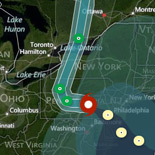 In the aftermath of Hurricane Sandy (or Frankenstorm, which is a much niftier term), we’re okay. Somehow Battery Park City was spared power failure and any significant water damage (at least that we’ve seen). Our friends and neighbors in other parts of the city endured floods the likes of which the city has never seen and widespread power failures in lower Manhattan.

It’s not clear when transit will return or when the bulk of the power will be fixed, but we are both okay and consider ourselves remarkably lucky to have come out as okay as we did.

Thanks to everyone who has asked how we’re doing!