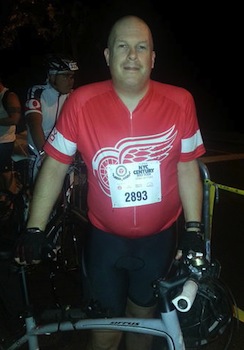 This past Sunday I rode in the NYC Century bike ride, which is a 100 mile (actually a 106 mile according to the route cue sheet) ride that takes place across Manhattan, Brooklyn, Queens and the Bronx. I’ve been curious about this ride for a while, but the ride date has often conflicted with the Boston/New York AIDS ride. This year, however, it was two weeks away from Cycle for the Cause so it was the perfect cap to this year’s training.

How did I do? Pretty decent, even though I didn’t complete. As I mentioned, the route was slated to be 106 miles. When you add in the 8 miles to / from the starting line, I should’ve ended the day at 122. However, from about the 75 mile mark I was battling a slow leak in my rear tire. That got progressively worse and I dropped out at the last rest stop in the Bronx, roughly 10 miles away from the finish line in Central Park.

I’m okay with that. I was tired after approximately 10 1/2 hours on the bike and the idea of changing the rear tire was not appealing. It likely would’ve taken longer to change than to finish the ride. Even with the early exit though I still clocked 102 miles–so I did a Century.

If you’d like to see the ride route, you can click over to Mark’s Strava page. His Garmin worked a little better than mine (one gap in mine was because I neglected to re-start after a stop and another gap in mine is because I lost the satellites for a span of about 6 miles).

Random thought on the NYC Century:

While I doubt I’ll do this ride again, I am glad I got it done once. It was very cool to see parts of NYC I’ve never seen before. It was fun hanging out with Mark for the day. It was also good to prove I could do this distance before leaving for Boston in less than two weeks.

CYCLE FOR THE CAUSE STARTS IN 10 DAYS! As I write this, I’m $700 away from my fund raising goal of $4,000. Please help me get there and donate today at http://ride12.kintera.org/jeffadams