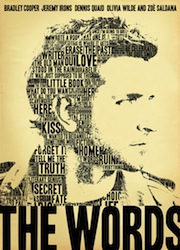 I was intrigued by this movie from the first trailers I saw a few months ago. It looked smart, dramatic and, of course, the fact it was about a writer was good thing too.

Happily The Words lived up to my expectations and then some.

The story centers around Bradley Cooper’s writer, Rory, who, despite working for a few years to become a full-time novelist, just can’t get a book sale. He decides to settle down, marry his fiancee (Zoe Saldana) and get a “real” job. On their honeymoon in Paris, they pick up a vintage briefcase and eventually the writer finds a manuscript inside.

Initially Rory copies it just to “feel the words flow through him.”  But when his wife reads it and encourages him to get it to an agent, he buries his morals and does it. It’s a tremendous success. And then Rory’s visited by the original writer (Jeremy Irons) who lost the manuscript back in the 40s.

The two stories of Rory trying to  become a writer, making the choice to plagiarize and then dealing with the aftermath along with the original writer’s story of how the manuscript came to be written were completely engrossing. I’ve never seen Bradley Cooper better. I wouldn’t be surprise at awards season if he gets some nominations for this performance. Zoe Saldana is perfect as his supportive wife. Jeremy Irons is superb telling his side of the story. It’s a mostly quiet performance but it has some powerful turns too.

The part of the movie I had a more difficult time with was with Dennis Quaid as a writer who wrote a book about Rory’s story. It was difficult to tell if his  book was fiction or non-fiction so it almost weakened the story because it wasn’t totally clear. At one point I thought Quaid might actually be an older Rory… but that’s also not clear. While this section of the movie is odd, in the long run it didn’t dampen my enthusiasm for the rest of the film.

It was great to see a solid drama as fall gets going. Hopefully it will be a great dramatic film season through the end of the year.