It’s tough when So You Think You Can Dance gets down to the end like this. The eliminations are difficult because everyone tends to be a favorite. That was the case last night with the guy eliminations.

Yes, I’m breaking my usual format and we’re talking eliminations first. The girl elimination didn’t bother me so much. Tiffany has been on the bubble for me and I was okay she didn’t make the final four. The guy elimination was difficult. I love Cole, Chehon and Cyrus. Cole and Chehon are amazing dancers. Cyrus is a great entertainer and I’ve loved watching him grow and adapt. If this was voting for “America’s Best Dancer,” Cyrus would’ve been the one eliminated. However, voting for “America’s Favorite Dancer” is more of a popularity contest and Cole came out on the losing end of that. I am devastated he’s been eliminated. At least I get to see him on tour!

Meanwhile, it was a great jam packed show. Everyone danced three times–with an all star, with another competitor and solo. Sonya choreographed a great opening group number that featured some awesome partnering and a great music track that kept the energy shifting. Meanwhile, the Axis Company closed the show with an extraordinary piece featuring two guys, one in a wheelchair and one without. It was a very strong, masculine piece and I loved it. 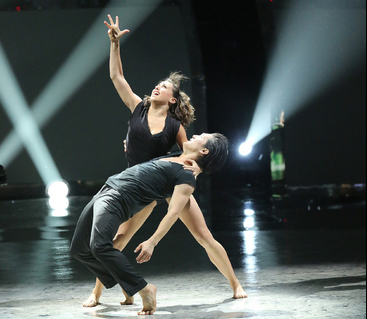 Chehon with all-star Kathryn Contemporary choreographed by Tyce Diorio
As much as I don’t like Tyce’s broadway stuff, he does some incredible contemporary. This has so much emotion and power behind it. Truly thrilling to watch. Great to see Chehon really let go with the emotions for a second week. 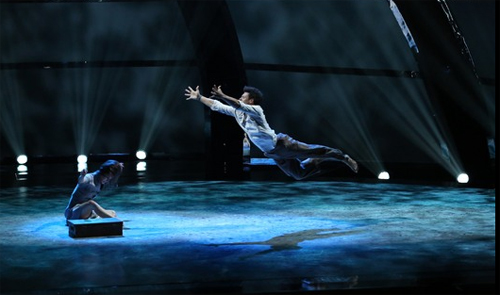 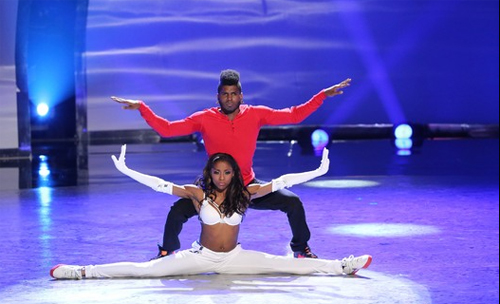 Here’s a look at the rest of the couple dances, in order of performance

Tiffany with all-star Benji Jive choreographed by Jean-Marc Généreux
She seemed tentative at first, but then she came alive and kept up with Benji, who is one of the best jive dancers ever on this show. The lift combination and connected cartwheels were such fun!

Cole with all-star Melanie Jazz choreographed by  Sonya Tayeh
I loved the physicality of this piece, especially that the woman lifted the man about as much as the man lifted the woman. Cole and Melanie were great together… and of course Sonya’s choreography was perfect.

Eliana with all-star Twitch Hip hop choreographed by Christopher Scott
This was a weird piece, which I absolutley loved. A mix of hip hop moves and 60s-style choreogrpahy, which was appropraite since it was set to a District 78 remix of The Marvelettes’ “Please Mr. Postman.”

Witney with all-star Marko Jazz choreographed by ray Leeper
Witney didn’t draw me in as much Marko did, but it was a strong piece. The second half with the killer lifts was great!

Chehon and Witney Cha Cha choreographed by Jean-Marc Généreux
Most of the fast latin dances haven’t been Chehon’s thing, but he did a pretty good job here. He did almost drop Witney as he tried to get her over his shoulder. I’m not sure if she didn’t jump right, or he didn’t catch right… but his strength saved the day.

Cyrus and Tiffany Broadway choreographed by Spencer Liff
This was a clunker for Cyrus. He never made himself look comfortable in the dance and he didn’t project enough character to get the audience  around that. Tiffany, however, sold the whole thing and kept it moving.

The solos…. Witney did a half paso doble that was pretty awesome… Chehon was great and adapted ballet to some very non-ballet music… Tiffany was nothing unique… Cole brought out a variation on his ninja dance and it had fabulous musicality… Eliana was a simple happy dance full of joy… Cyrus also brought nothing new to the table and that was disappointing.

Next week is the performance finale. Last week I said I was looking at Cole and Eliana to win. I’m still banking on Eliana as the girl. For the guy though I think it will probably be Cyrus, but since I also want a good technical dancer to win I really want it to be Chehon.