Every Day by David Levithan 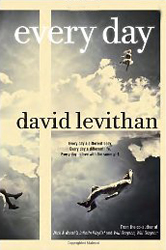 Finding a new David Levithan book is always exciting. It always means a great read is ahead. His new book, which just released this past Tuesday, went way past great read into something extraordinary.

In Every Day you meet A. A is  a being that spends his life (her life?.. we’ll go with male pronouns here) hopping bodies of humans who are the same age he is. When the book begins, A is on day 5,994. His 5,994th body. It’s the day everything changes. Today he’s in the body of Justin and over the course of the day he falls in love with Justin’s girlfriend, Rhiannon.

Until he met Rhiannon, A was used to living each day on its own. For him there is no tomorrow that can be the same because the body, the surroundings, the circumstances will be different. Even in the consecutive  days where he jumps between twins, the days are different. He’s used to this…to having no permanent connections. Suddenly, with Rhiannon, he wants a connection.

A starts to break his own rules. Over the years he’s worked hard to make sure he doesn’t disrupt the lives of the host bodies. That goes out the window. Since he only jumps into  bodies nearby, he does anything he can to get back to where Rhiannon is. The day he goes to a party he knows Rhiannon will be at, he ends up and changes Ethan’s life forever. A doesn’t cover his tracks at Ethan’s well and he ends up and leaves Ethan asleep in his car on the side of the road.

Now he’s got two lives in turmoil. A tells Rhiannon about how he lives. To say that makes things interesting is an understatement. He’s also got Ethan looking for answers to what happened on that day. Ethan knows the details of the day, but not how they happened.

This book is fascinating. Not only do we get to know A and what life is like for him, we get a slice of life from the people he inhabits. He’s able to access the memories of the host so he knows what needs to happen in the day and who people are so he’s able to fit into the life. Over the course of the book he bounces between boys and girls and across all kinds of demographics. Particularly interesting are the suicidal girl, the girl choosing to live as a boy, the gay boy going to pride with his boyfriend, the girl who doesn’t go to school but goes work as a maid. Besides the 40 days we get in the book, A does speak of some of the other lives he’s visited as well. Leviathan does a fantastic job crafting all these different characters and, in particular, A is one of the most interesting characters I’ve come across in a long time.

The book culminates with A trying to figure out his future and what to do about his need to be with Rhiannon and see her happy along with the questions that Ethan ends up presenting him with. I desperately wanted more days to roll out in the book because, while the book does end at a good place, I wanted to know what A would do next.